Senior United Nations officials today expressed their deep concern about the fast deteriorating situation in Yemen, where dozens of civilians have been killed in fighting in recent days.

“The situation in Yemen is extremely alarming, with dozens of civilians killed over the past four days,” said Zeid Ra'ad Al Hussein, the UN High Commissioner for Human Rights, echoing a statement issued by UN Secretary-General Ban Ki-moon's Spokesperson.

“The country seems to be on the verge of total collapse,” the High Commissioner said, calling on all sides to protect civilians from harm, and to resolve their differences through dialogue rather than through the use of military force.

At least 93 civilians were reported to have been killed since 27 March and a further 364 injured in Sana'a, Sa'da, Dhale, Hudayda and Lahj, among whom were “dozens” killed in an airstrike on the Al-Mazraq camp for internally displaced persons that was established by the UN in 2009. At least another 35 were injured in the raid, including 11 children.

“The killing of so many innocent civilians is simply unacceptable,” said Zeid. “The principles of proportionality, distinction, and precaution fully apply in this context. International human rights law and humanitarian law should be fully respected.”

The High Commissioner, who said he was “shocked” by the attack on the camp, was joined by Johannes Van Der Klaauw, the UN Humanitarian Coordinator in Yemen, who said he “deplored” the airstrike in the strongest terms.

“Confirmed reports state that the strikes destroyed a camp management office and a bridge adjacent to one camp, as well as damaging the local market and a health facility,” said Mr. Van Der Klaauw. “These sites constitute civilian infrastructure.”

Mr. Van Der Klaauw said around 1,100 families were living in the camp, having fled a series of conflicts in Sa'ada between 2004 and 2010. The families, who Mr. Van Der Klaauw described as being “among the most vulnerable people in Yemen” were relying entirely on external assistance to meet basic needs.

“With many camp residents now fleeing, they are again forced to seek refuge elsewhere, adding trauma to their already vulnerable state,” he said. “In mid-March, humanitarian partners had initiated a voluntary return programme for camp-based IDPs. Unfortunately, these efforts have now come to a halt.”

The High Commissioner for Human Rights said violence has also displaced many others, with hundreds reported to have fled their homes in Sana'a, Sa'da and Dhale. Heavy fighting has also been reported in the streets of Aden, resulting in casualties and making the humanitarian situation extremely difficult.

“Private homes, hospitals, education facilities and infrastructure in several locations have been destroyed, making life even more difficult for the people in this war-torn country,” said Zeid, pointing to attacks on civilian airports and electricity supplies in Sa'da, Sanaá and Hudayda. Meanwhile, in Dhale, hospitals were attacked, causing an unknown number of casualties.

“I roundly condemn all attacks on hospitals and other medical facilities, which have a special protected status under international law,” he said.

UNICEF's Yemen Representative, Julien Harneis, who spoke from Amman, said education was also under attack, adding that the violence and displacement were leaving children terrified.

“Children are in desperate need of protection, and all parties to the conflict should do all in their power to keep children safe,” he said, pointing to a “rapidly deteriorating” humanitarian situation in the country, which was worsening already precarious conditions for children.

The UN Secretary-General noted that children were among those killed in the attack on Al-Mazraq camp and in several attacks on hospitals in Dhale and he reminded all parties of their obligations under international humanitarian law to ensure the protection of civilians.

“This includes the strict adherence to the principles of proportionality, distinction, and precaution,” said a statement released by his Spokesperson this afternoon, which also stressed that hospitals and other medical installations have a special protected status under international law.

“The Secretary-General reiterates his firm belief in the necessity to resolve the conflict through peaceful means,” the statement concluded. 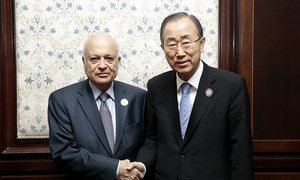 United Nations Secretary-General Ban Ki-moon and Nabil El-Araby Secretary General of the League of Arab States pledged today continued cooperation between the two organizations and discussed strengthening international efforts on a range of issues as the League's Summit continued in Sharm el-Sheikh, Egypt.