As schools reopen across the cyclone-battered nation of Vanuatu, 30,000 children will begin receiving targeted assistance in order to help them resume classes and continue with their studies, the United Nations Children’s Fund (UNICEF) announced today.

In a press release, the UN agency confirmed it would begin providing “urgent assistance” in the form of school education and recreation supplies, tents for use as temporary classrooms and school kits as part of the Organization’s wider humanitarian relief efforts in the archipelagic nation.

“It is critically important for children to return to school, even if it is a temporary location or facility, immediately after an emergency because schools keep children safe from harm, minimum disruption to learning enables them to progress as expected to exams, and the school day gives them a sense of normalcy and stability that helps them to psychologically recover,” explained UNICEF Pacific Representative Dr. Karen Allen in the release.

Vanuatu was struck two weeks ago by Cyclone Pam, a Category 5 tropical storm, which descended on the country with 250kmph winds and 320kmph gusts, causing widespread damage to agriculture, infrastructure, and impacting services such as electricity and communications. Initial assessments of the storm's immediate aftermath in Vanuatu counted 17 people dead and some 65,000 people homeless as well as 166,000 people in urgent need of life-saving assistance.

In addition, UNICEF estimates that up to 50 per cent of Vanuatu’s schools suffered damage to infrastructure, facilities and resources during Cyclone Pam. On badly-affected Tanna Island, for instance, six of the ten classrooms at Lenakel Presbyterian College were destroyed as well as the dining room, boys’ dormitories and teacher’s quarters. All learning resources have also been damaged, the agency reported.

“Often the cost of replacing school supplies is too much for a family to cover when their homes, possessions and livelihoods have been damaged or destroyed,” Dr. Allen continued.

“These kits facilitate children’s return to school and provide a reminder that education should remain a top priority for affected students and their families even in the face of immense challenges.”

However, as the agency rolls out its humanitarian assistance for the affected region, it has also warned that a funding shortfall could risk impeding its continuing efforts. Just last week, UNICEF spokesperson Christophe Boulierac announced a $4.8 million appeal in order to make sure that children and their families in Vanuatu and in affected communities in Tuvalu, Solomon Islands, and Kiribati had access to clean water, sanitation and hygiene and health services including immunisation. 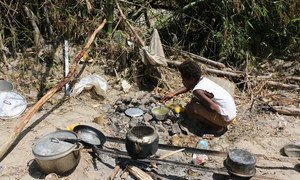