As the Security Council met this morning to discuss threats to international peace and security caused by terrorism, top United Nations officials briefed the 15-member body on the impact of Boko Haram in Nigeria and beyond, warning of the group’s intensified violence and brutality.

“Though weakened, the group continues to commit horrendous acts against civilians, including against women and children,” said Mohamed Ibn Chambas, the Special Representative of the Secretary-General and Head of the UN Office for West Africa (UNOWA). “Boko Haram’s recent allegiance to the Islamic State for Iraq and the Levant (ISIL), whether for publicity reasons or to tap into ISIL’s support, is also of concern as it is gives a clear signal that Boko Haram’s agenda goes well beyond Nigeria.”

Mr. Chambas, who was joined in the Council by Assistant Secretary-General Kyung Wha-Kang of the UN Office for the Coordination of Humanitarian Affairs, outlined reports of the abduction, abuse, recruiting, maiming and killing of children, saying schools in the country’s north-east and in areas of Cameroon and Niger targeted by Boko Haram no longer safe places of learning, with many attacked, looted, and destroyed.

“In 2014, the group also commenced using young girls as suicide bombers for attacks in populated urban areas,” he said. “We have also observed an alarming trend of children being used by the group as human shields.”

Ms Kang described the humanitarian needs arising from Boko Haram attacks, saying that more than 7,300 civilians had been killed by Boko Haram since the beginning of 2014 in the three 'state of emergency' States, including 1,000 people this year alone.

As many as three million people in northern Nigeria would not be able to meet their basic food needs after July 2015 without humanitarian aid and the work of Federal and State authorities was not enough to meet those needs.

“The humanitarian situation in north-east Nigeria and in the conflict-affected areas in neighbouring countries remains dire,” said Ms. Kang. “The conflict continues to have a devastating impact on women, children and young people, as well as on many others who have been traumatized by violence. Additional funding to address the acute humanitarian needs of those affected by the conflict is urgently needed.”

Mr. Chambas stressed the issue of human rights abuses, pointing to evaluation missions launched by the Office of the UN High Commissioner for Human Rights (OHCHR) that visited the Far North region of Cameroon and the Diffa region of Niger. Both found human rights abuses, including indiscriminate killing of civilians, abductions and forcible recruitment of civilians into combat.

Since Boko Haram attacks in Diffa in February, Mr. Chambas said schools in the region remained closed, depriving children of the right to be educated.

“The local economy in the Diffa region is also being negatively affected by a continuing State of Emergency,” he said. “In response to these and other concerns, the United Nations is in the process of scaling up its presence and operations in Nigeria, Niger and Cameroon.”

Mr. Chambas commended the response of the Lake Chad Basin Commission countries, notably the joint regional offensive, which involved troops from all four countries and which resulted in the recapture of several key towns in north-east Nigeria.

“At the beginning of the year, Boko Haram controlled some 20 local governmental districts in the three north-eastern states in Nigeria,” he said. “Today, Boko Haram holds only a few areas in Borno State. Moreover, according to reports by the Nigerian Army, on 27 March, Boko Haram’s headquarters in Gwoza was captured.”

Stressing UN support for such efforts, he underlined that counter-insurgency operations must be free from human rights violations.

“This is not only an absolutely vital principle, but also an effective strategy,” he said. “Communities which believe that their Government seeks to protect them are far more likely to cooperate with the authorities, and far less likely to support insurgent groups.”

He also reiterated the Secretary-General’s message that a military approach alone would not suffice in containing the Boko Haram threat, and stressed the international community’s obligation to help the countries of the region to address the social, economic and political challenges associated with Boko Haram.

Both Mr. Chambas and Ms Kang made reference to general elections that took place in Nigeria over the previous weekend. Mr. Chambas said that the observation mission by the Economic Community of West African States (ECOWAS) had noted only “pockets of incidents and logistical challenges,” with the elections passing the test as “free and transparent.”

Ms. Kang added that despite reports of suspected Boko Haram attacks in Yobe, Gombe and Borno States, no additional humanitarian needs had so far emerged as a result of the election. 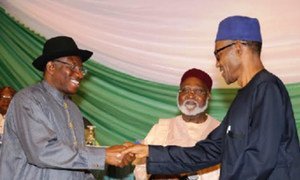 United Nations Secretary-General Ban Ki-moon has congratulated the people and Government of Nigeria on the largely peaceful and orderly conduct of yesterday's presidential and parliamentary elections.