The top United Nations official in Somalia along with the members of the UN Security Council have strongly condemned yesterday's terrorist attack on a hotel in Mogadishu city that resulted in the death of many civilians, including the Somali Federal Government's Permanent Representative to the UN Office in Geneva, Ambassador Yusuf Bari-Bari.

"I condemn yesterday's terrorist attack in Mogadishu in the strongest terms and am appalled by the complete disregard for the lives of innocent civilians shown by the attackers,” said Nicholas Kay, Special Representative of the Secretary-General and head of the UN Assistance Mission in Somalia (UNSOM).

Mr. Kay went on to say that he was saddened to learn that Somalia's Permanent Representative to the UN Office in Geneva, Ambassador Yusuf Bari-Bari, was one of the victims who succumbed to his injuries last night.

“He will be remembered for his strong personal commitment to protecting and promoting human rights for all," said the UNSOM chief, adding: "At this difficult time, I would like to offer my sincere condolences to the Federal Government, the family and friends of all those who died or were injured."

Later in the day, through a statement to the press, the members of the UN Security Council also deplored the attack on the Maka al-Mukarama hotel, and expressed their deep sympathy and condolences to the families of the victims, as well as to the people and Government of the Federal Republic of Somalia. The Council members also wished a speedy recovery to those injured.

Paying tribute to the “swift response and courage” of the Somali National Security Forces in responding to this attack, the Council underlined the need to bring perpetrators, organizers, financiers and sponsors of these reprehensible acts of terrorism to justice.

“The members of the Security Council underlined that neither this, nor any other senseless act of terrorism in Somalia, would dent their resolve to support the peace and reconciliation process in Somalia,” concluded the statement. 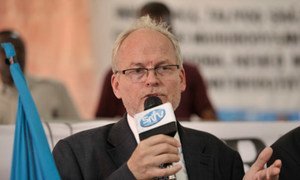 The United Nations envoy in Somalia has strongly condemned today’s attack in Baidoa town in the Interim South West Administration, which resulted in the death and injury of security personnel and civilian bystanders.