ECCC
Extraordinary Chambers in the Courts of Cambodia.
27 March 2015

The United Nations-backed court set up to bring to trial those most responsible for crimes committed during Cambodia’s Khmer Rouge regime today announced charges against former member Ao An of “crimes against humanity of murder, extermination, persecution on political and religious grounds, imprisonment, and other inhumane acts” committed at three sites.

The court, known as the Extraordinary Chambers in the Courts of Cambodia (ECCC), was set up in 2006 to bring to trial senior leaders and those most responsible for crimes committed during the Khmer Rouge regime from 1975 to 1979, during which at least 1.7 million people are believed to have died from starvation, torture, execution and forced labour.

With the filing of these charges, according to the court announcement, “Ao An, through his lawyers, is permitted to have access to the case file and to participate in the investigation, thus accelerating its progress.”

“This will allow the investigation to proceed with full respect of the rights of all parties and to conclude it within a reasonable time with the issuance of a closing order,” it said.

The ECCC, which is currently handing four cases, was created by Cambodia and the United Nations, but is independent of them, and is a Cambodian court with international participation that will apply international standards.

Ao An is part of what is known as ‘case number 4.’ 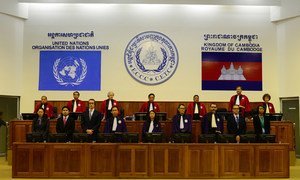 A United Nations-backed court has found the two most senior surviving leaders of Cambodia's brutal Khmer Rouge regime guilty of crimes against humanity and sentenced them to life in prison.