WHO/T. Jasarevic
Doctors treat a seriously injured man for head wounds at the Al Razy surgical hospital, one of only 4 remaining hospitals in Aleppo, Syria.
27 March 2015

Ahead of next week’s third International Humanitarian Pledging Conference for Syria, the United Nations health agency’s top official in the country said today that more than 16 million Syrians and Syrian refugees are in need of health support, but that she had so far received no new funding to meet the $124 million needed to finance humanitarian operations in the country this year.

“The Kuwait pledging conference comes at a crucial moment to show the world`s commitment to assisting those affected by the crisis,” said Elizabeth Hoff, UN World Health Organization (WHO) Representative in Syria. “We are unable to sustain our operations as the funding gap increases at an alarming rate. We call upon donors to continue to support our efforts to provide basic health services to the Syrian people.”

Ms. Hoff, speaking after returning from a recent visit to Aleppo, during which she visited Al Razy hospital shortly after scores of people were brought in following an attack on a public square the previous day, noted that only four out of 11 public hospitals remain operational in the city and all health facilities are overcrowded and experiencing critical shortages of medical supplies.

“Scenes of severely injured children and civilians are yet another stark reminder of the immense and continuous suffering of the Syrian people,” she said, noting that 57 per cent of public hospitals nationwide are only partially functioning or are completely out of service. In Aleppo, she said hospitals required generator power because the population could rely on electricity for only one to three hours each day and she estimated that 1.3 million people needed health assistance in Aleppo alone.

At the same time, she said, the health situation continues to deteriorate across the country.

“As weather temperatures become warmer, there is an increased risk of waterborne diseases,” she said. “Therefore, improving hygiene conditions and practices is essential to protecting the population.”

Currently, WHO is unable to chlorinate water stations, which has led to heightened risks, which she also expressed concerns about several other issues, including the drop in vaccination rates from about 90 per cent nationwide before the crisis, to between 50 and 60 per cent now.

Ms. Hoff described how healthcare was also jeopardized by the 70 per cent drop-off in local production of medicines and lack of availability of many life-saving treatments, as well as by shortages of surgeons, anaesthesiologists, laboratory professionals, and female health professionals. The total number of available healthcare workers stood at just 45 per cent of 2011 levels. 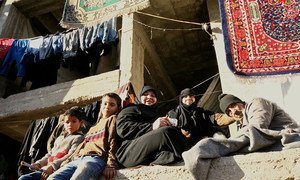 The situation on the ground in Syria has “dramatically” worsened as the country enters its fifth year of war amid escalating fighting and targeted attacks against civilians, the top United Nations humanitarian official warned today as she urged the international community to bring the violence to an end.