UN Photo/Eskinder Debebe
Secretary-General Ban Ki-moon (centre left) and Sam Kutesa (centre right), President of the General Assembly, cut the ribbon at the unveiling ceremony of “The Ark of Return,” the Permanent Memorial to honour the Victims of Slavery and the Transatlantic Slave Trade.
25 March 2015

United Nations officials today welcomed the unveiling at the world body’s New York Headquarters of a permanent memorial to the victims of slavery and the transatlantic slave trade which they acknowledged was one of the most horrific tragedies of modern history.

“This memorial stands as a strong and permanent reminder – not only of this gross injustice but of the goals that the UN set for itself 70 years ago,” Secretary-General Ban Ki-moon said at the unveiling. “This poignant and powerful memorial helps us to acknowledge the collective tragedy that befell millions of people. It encourages us to consider the historical legacy of slavery and, above all, it ensures that we never forget.”

He pointed to the UN’s educational work, teaching students about the transatlantic slave trade through the ‘Remember Slavery Programme’ and ensuring they appreciate how intolerance and racism can easily breed acts of hatred and violence.

“I hope descendants of the Transatlantic Slave Trade will feel empowered as they remember those who overcame this brutal system and passed their rich cultural heritage from Africa on to their children,” Mr. Ban said, while also issuing a call to honour women of African descent, noting that a third of those sold as slaves from Africa were female.

“In addition to enduring the harsh conditions of forced labour as slaves, they experienced extreme forms of discrimination and exploitation as a result of their gender,” he said. The theme of the annual International Day of Remembrance of the Victims of Slavery and the Transatlantic Slave Trade this year is ‘Women and Slavery.’

Mr. Ban was joined at the unveiling of the ‘Ark of Return’ by the Prime Minister Portia Simpson-Miller of Jamaica, the memorial’s architect, Rodney Leon, as well as senior UN officials, including General Assembly President Sam Kutesa, who said that slavery remained one of the “darkest and most abhorrent chapters” in world history.

“The majority of the victims of this brutal, primitive trade in human beings remain unnamed and unknown. Nevertheless, their dignity and courage was boundless and worthy of this honour and tribute,” said Mr. Kutesa. “While this may be a solemn occasion, it is also an opportunity to celebrate the legacy of those unknown and unnamed enslaved Africans and honour their proud contribution to our societies, our institutions and our world.”

Recalling the launch last December of the International Decade for People of African Descent, Mr. Kutesa said the ‘Ark of Return’ would be one of the most important contributions of the entire decade.

“The fact that we will unveil it today and have unveiled it today on the first remembrance day of the decade is a major accomplishment,” he said.

He also noted the “deplorable and unacceptable” fact that 21 million people today are subjected to forced labour. “We have an obligation to stop modern slavery in whatever form it may be disguised.”

The Director-General of the UN Educational, Scientific and Cultural Organization (UNESCO), Irina Bokova, said the memorial stands as a statement of the world’s commitment to breaking the silence around the horrific tragedy of slavery and the slave trade and the millions of people it affected.

“This memorial is a symbol of our determination to pay tribute to these people and their resistance to the slave trade,” she said. “And this memorial is an act of remembrance but it is also a call to action, embodying the principles at the heart of the UN.”

Her words were echoed by the memorial’s designer, Rodney Leon, who also noted the role that his monument could play in educating people.

“It is our solemn responsibility to educate the future generations and to take our responsibilities seriously,” he said. “So this Ark of Return will stand as a constant reminder on the plaza of the United Nations, for all of us, not only to international leaders but also to the most basic of us here to never forget and to never repeat the mistakes of the past.” 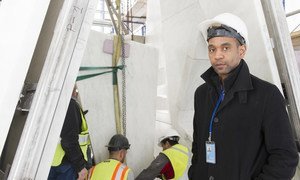