UN Photo/Mark Garten
Rodney Leon, architect and designer of 'Ark of Return' the Permanent Memorial to the Victims of Slavery and the Transatlantic Slave Trade.

Designed by Rodney Leon, an American architect of Haitian descent who was chosen in 2013 as the winner of an international competition attracting a total of 310 entries from 83 countries, ‘The Ark of Return’ honours the memories of the estimated 15 million men, women and children who were victims of the largest forced migration in history.

“It makes me feel extremely proud that I can play a role and a part in the commemoration of such an important and historic day,” Mr. Leon says in an interview. “I feel really proud that we have a physical marker and a place of remembrance for this annual celebration to take place moving forward.”

Having also been chosen to design the African Burial Ground National Monument in lower Manhattan, erected on a spot where 15,000 people of African origin were buried over a period of around 100 years from the 1690s until 1794, Mr. Leon is familiar with art relating to slavery and the African experience in the Americas.

He also acknowledges that his own background played a powerful role in drawing him to enter the design competition. As a Haitian-American, he says he feels in touch with Haitian liberation and the people’s struggle to be the first independent African state in the western hemisphere.

“My parents were always able to communicate to us as a family in terms of our history and our culture,” he says. “And I think that that plays a role in my being extremely proud of our Haitian and our African heritage. And as a result, when we have these legacies and these opportunities I think I tend to gravitate towards them.”

Having won the competition, Mr. Leon assembled a complex team to tackle the project, which included other architects, as well as structural, mechanical, electrical and plumbing engineers, sculptors, steel workers, lighting designers and people with expertise in building water features.

UN Photo/Rick Bajornas
The Ark of Return, the Permanent Memorial to Honour the Victims of Slavery and the Transatlantic Slave Trade, located at the Visitors' Plaza of UN Headquarters in New York.

A spiritual space of return

“It was such an international process, an international project, and that actually makes me feel very good inside,” he says, noting the inclusion of teams of people from the Caribbean, different parts of Africa as well as Europe. “And I think that really speaks about the transcendence of where we have come from in order to be in this place today and how that can become part of like the healing process.”

Designed to pay tribute to the courage of slaves, abolitionists and unsung heroes while promoting greater recognition of the contributions made by slaves and their descendants to societies worldwide, the project’s name, ‘Ark of Return,’ was inspired by maps of the triangular slave trade and by the story of a slave castle on Gorée Island in Senegal.

It was at Gorée Island that slaves were held in captivity before being shipped away. A door at the castle was known as the ‘door of no return,’ and Mr. Leon says the image was a “very tragic” one to him.

“We were also interested in the idea of the slave ships and these vessels that carried people through tragic conditions to the new world,” he says. “So we felt it would be a good counterpoint to establish a spiritual space of return, an ‘Ark of Return,’ a vessel where we can begin to create a counter-narrative and undo some of that experience.”

The aim was not only to document and remember the past but also to look beyond it and move forward into the future, allowing people to experience the tragedy and simultaneously to communicate and heal.

Ahead of the memorial’s unveiling this week, the UN News Service got a sneak preview of ‘The Ark of Return’ on a private tour with Mr. Leon. Walking around the memorial, interacting with it and explaining his intentions with the design, he explains that that is also what he expects visitors to the UN to do as well.

UN Photo/Devra Berkowitz
Details from the permanent memorial in acknowledgement of the tragedy and in consideration of the legacy of slavery and the trans-Atlantic slave trade.

Maps that help us acknowledge the impact, the tragedy

Mr. Leon says the tactile elements are meant to encourage fuller engagement and he hopes the monument can become both a pilgrimage for the public and a totem for dignitaries at the UN, reminding them, as they deal with global issues on a daily basis, of mistakes made in the past.

These three triangular patterns describe the slave routes [it] helps us acknowledge the impact, the tragedy

Highlighting some of the features of the monument, he notes the triangular marble panels, which were inspired by the maps of the triangular trade in slaves. The maps are also reflected explicitly in the structure, with three such maps etched into the walls, so visitors are confronted by the uncomfortable truth.

“These three triangular patterns describe the slave routes from specific locations in West Africa and throughout Africa to South America, to the Caribbean and Central America, and to North America,” he says. “So this map is supposed to really help us acknowledge the impact, the tragedy, the scale of the impact of the global slave trade and how it really transformed the world.”

UN Photo/Devra Berkowitz
Details from the permanent memorial in acknowledgement of the tragedy and in consideration of the legacy of slavery and the trans-Atlantic slave trade.

Pack in as much “human cargo” as possible

Other imagery that struck Mr. Leon and his team during research for the project included drawings of actual slave ships, depicting cross-sections of vessels and showing their systematic organisation in order to pack in as much “human cargo” as possible.

“We felt that that experience was very much something that needed to be visually described,” he says, referring to the human forms, stacked horizontally in three levels, barely able to sit-up. “I think they lost at lest 15 per cent or more of the ‘cargo’ on a typical slave journey.”

And one of the most important elements of the memorial is that of a deliberately androgynous human sculpture, called ‘the trinity figure,’ representing the human spirit and the spirit of the men, women and children of African descent whose deaths resulted from the Transatlantic Slave Trade.

“A lot of people had to suffer in very confined quarters,” he says. “And the reason why it kind of seems like it’s androgynous, it’s sort of meant to represent those three elements – men, women and children. You’re sort of not really supposed to be able to tell.”

The figure’s leg, hand and face are made from black Zimbabwean granite.

“It has an outreached hand that’s meant to kind of reach out to people that are coming in,” he says, going on to describe one of the key aspects of the entire memorial. “It features a kind of tear that comes out of the face. That tear is supposed to wash down the side of the face and sets up the third element in the project.”

UN Photo/Devra Berkowitz
A close-up of details from the permanent memorial in acknowledgement of the tragedy and in consideration of the legacy of slavery and the trans-Atlantic slave trade.

That third element is a triangular waterfall, created by the tears that flow from the face of the ‘trinity statue’ into two triangular reflecting pools. Mr. Leon says this element, located outside of the memorial, looks ahead to the future.

“It’s really about dealing with our current conditions of contemporary slavery and how that actually is something we need to be fighting today,” he says. “It’s about acknowledging that condition and thinking about future generations and educating future generations so this tragedy doesn’t happen again in the future. So that’s why it’s pointing the way forward for us after you’ve passed through.”

It’s really about dealing with our current conditions of contemporary slavery and how that actually is something we need to be fighting today,

Mr. Leon says this final element is a “critical component” of the memorial because of the educational component it contains. And it is that part of the project that excites him most. While acknowledging that he will be “very excited and relieved” when the memorial is revealed to the public, he says he will be most moved by seeing schoolchildren moving through the monument, learning about the history to which it speaks.

“Those are the moments that I find that are much more satisfying,” he says. “It’s going to be exciting to actually be there on the day of the unveiling but I think that it’s also the ongoing education moving forward from there that actually brings me ongoing joy as well.” 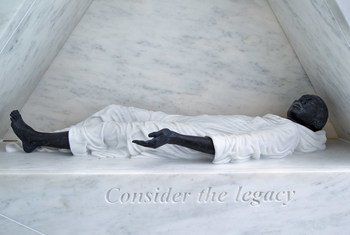 A permanent memorial to honour the victims of one of the most horrific tragedies of modern history will be revealed at United Nations Headquarters in New York on Wednesday, when the world marks the International Day of Remembrance of the Victims of Slavery and the Transatlantic Slave Trade.