As the international community gathers to commemorate the millions of victims exploited by slavery and the transatlantic slave trade, United Nations Secretary-General Ban Ki-moon today warned that the insidious practice of forced bondage continued to reverberate around the world in various forms – from forced labour and trafficking to sexual exploitation and captivity in slavery-like conditions.

“Tragically, slavery has still not ended. Slavery stubbornly persists in many parts of the world,” Mr. Ban declared in his annual message marking the International Day of Remembrance of the Victims of Slavery and the Transatlantic Slave Trade. “These despicable practices could not exist without deep-seated racism. It is absolutely vital that the dangers inherent in racism are made crystal clear to all.”

On March 25 every year since 2007, the UN observes the International Day to honour the more than 15 million men, women, and children who suffered and died during the more than 400-year transatlantic slave trade, the largest forced migration in history.

This year's theme, “Women and Slavery,” pays tribute to and celebrates the strength of the many enslaved women who endured unbearable hardships, including sexual exploitation, as well as those who fought for freedom from slavery and advocated for its abolition.

According to the UN, it is estimated that one third of the approximately 15 million people who were deported from Africa through the Transatlantic Slave Trade were women.

In remembering their grim legacy, Mr. Ban acknowledged that women slaves had played “a key role” in maintaining the dignity of their communities, adding that “too often their leadership and brave resistance have been underestimated or forgotten.”

The Day will be marked by a number of commemorative ceremonies held at UN Headquarters in New York, including a special General Assembly meeting, a global video conference held with students, and the Secretary-General's unveiling of the Ark of Return – a permanent memorial honouring slavery's victims which, Mr. Ban said, would “bring home to people from around the world the terrible legacy of the slave trade.”

“The Transatlantic slave trade remains a monstrous crime and a stain on human history,” the Secretary-General continued. “On this important Day of Remembrance, I call for a renewal of our commitment to end modern slavery, so our children will live in a world free of racism and prejudice with equal opportunity and rights for all.”

Celebration of the 20th Anniversary of the Slave Route Project. Credit: UNESCO 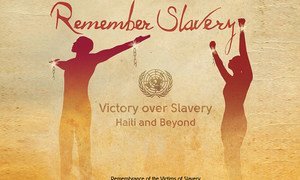 With calls to remember the abuses of the past and intensify efforts to end those of the present, United Nations officials are marking the International Day of Remembrance of the Victims of Slavery and the Transatlantic Slave Trade by urging the international community to work towards a future in which no form of human slavery exists.