The United Nations Security Council has voiced its “profound disappointment” at the failure of all parties in South Sudan to conclude an agreement that would bring the country closer to resolving its ongoing conflict and usher in a period of national unity and peace.

In a presidential statement, the 15-member body underscored “the seriousness and urgency” of the situation on the ground in South Sudan and reiterated its “strong condemnation” of the repeated violations of the Cessation of Hostilities Agreement, accepted and signed by both the Government and opposition forces last year.

Moreover, the Council reiterated its intent to impose any sanctions that may be appropriate in order to encourage all parties to accelerate efforts in forming a Transitional Government of National Unity and to “take effective and comprehensive steps” to end military operations and all acts of violence.

The statement, read out by Ambassador François Delattre of France, which holds the Council presidency for March, also reaffirmed the body’s “deep concern that the conflict has resulted in great human suffering,” and restated its “deep appreciation” for the “courageous actions” of the UN Mission in South Sudan (UNMISS) in protecting civilians.

“The Security Council further underscores the significant importance of fighting impunity and ensuring accountability for serious violations and abuses of human rights and violations of international humanitarian law in South Sudan, including those that may amount to war crimes and crimes against humanity,” the statement added.

The security situation in South Sudan has deteriorated steadily over the past year since political in-fighting between President Salva Kiir and his former Vice-President, Riek Machar, and their respective factions erupted in December 2013. The hostilities subsequently turned into a full-fledged conflict that sent nearly 100,000 civilians fleeing to UN bases around the country.

Currently, UN bases are sheltering over 110,000 internally displaced persons (IDPs) with an additional 1.5 million others displaced throughout the country and 500,000 outside the country.

In addition, the number of food-insecure civilians is slated to rise from the current 2.5 million as the country approaches its critical lean season. 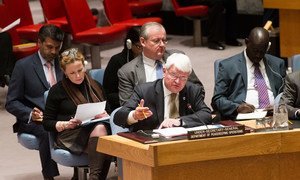