The United Nations refugee chief António Guterres began a two-day visit to Cameroon today to see the impact of the displacement crises in neighbouring Nigeria and Central African Republic (CAR), which have sent over hundreds of thousands fleeing for safety.

“The High Commissioner will discuss both humanitarian crises with President Paul Biya and thank the Cameroonian Government and people for their generous open door policy and hospitality towards refugees,” Karin de Gruijl, a spokesperson for the UN High Commissioner for Refugees (UNHCR), told reporters in Geneva.

“They will also discuss the support that is needed to improve the living conditions for the refugees, internally displaced people and the host communities in Cameroon.”

More than 74,000 Nigerians have crossed into the Far North region of Cameroon, including 25,000 who escaped clashes between the regional military forces and insurgents in north-eastern Nigeria in the month of February alone, according to UNHCR.

Cameroon is also hosting more than 244,000 people who escaped the conflict in CAR, the agency added. In addition, border clashes in northern Cameroon have also led to the displacement of 96,000 Cameroonians.

“Because of the highly insecure situation in the border areas in the Far North region, UNHCR has been moving the refugees to Minawao refugee camp, located some 90 kilometres from the regional capital Maroua,” said Ms. de Gruijl. “The relocation exercise is ongoing, but, despite the insecurity, many refugees prefer to stay close to the border either to wait for relatives, take care of their cattle or return home as soon as the situation there improves.”

Mr. Guterres will visit the Minawao camp on Wednesday to hear the refugees’ testimonies first hand and see the conditions in the camp, which is now home to nearly 33,000 Nigerian refugees. He will also meet with some of the estimated 96,000 Cameroonians who have been internally displaced by insurgents crossing into the country and offer UNHCR’s support to help cover their most urgent needs.

This support consists of shelter and basic household items for the internally displaced, projects to improve local health and other facilities, as well as interventions to prevent and respond to sexual and gender-based violence and strengthen the protection of children.

In February, UNHCR issued an appeal for $71 million for life-saving protection and assistance activities in Nigeria and the neighbouring countries.

“The needs described in this appeal have however already been surpassed and we are preparing an updated one for release in the coming weeks,” said Ms. de Gruijl. “Thus far, only $6.8 million in contributions have been received for this crisis, making it one of UNHCR's most underfunded emergencies worldwide.” 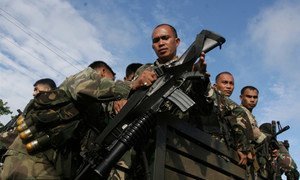 Intensifying armed conflict in the southern Philippines island of Mindanao has displaced some 120,000 people since late January, the United Nations refugee agency said today, expressing particular concern for the safety of women and children who could be exposed to exploitation and abuse.