WFP/Victoria Cavanagh
Many families affected by Tropical Cyclone Pam are forced to prepare their meals outdoors as seen here in Vanuatu.
24 March 2015

The Category 5 tropical cyclone descended upon Vanuatu, Tuvalu and a number of other Pacific islands 11 days ago battering them with 250kmph winds and 320kmph gusts which caused widespread damage to agriculture, infrastructure, and impacting services such as electricity and communications. Initial assessments of the storm's immediate aftermath in Vanuatu counted 17 people dead and some 65,000 people homeless as well as 166,000 people in urgent need of life-saving assistance.

“The people affected by Tropical Cyclone Pam face serious immediate risks to their health and wellbeing, as well as threats to their livelihoods and future resilience to disasters,” the UN's humanitarian coordinator for the archipelagic nation, Osnat Lubrani, said in a press release issued earlier today. “Today we stand with the Government of Vanuatu and urgently seek the support of the international community at a time of immense need.”

The appeal – launched by OCHA and the Government of Vanuatu – calls for $29.9 million to ensure that initial support provided by the Government, donors and humanitarian partners can be sustained to cover the needs of affected people until the end of June 2015. According to further estimates, around 75,000 people are in need of shelter and 110,000 people do not have access to safe drinking water.

“Although the people of Vanuatu have shown immense resilience and strength at this difficult time, more urgent assistance is required to ensure that Vanuatu can focus on recovering from this disaster – and that potentially life-threatening impacts from disease, food insecurity and a lack of shelter can be avoided,” added Ms. Lubrani.

An initial assessment by the UN's Food and Agriculture Organization (FAO) has found “extensive damage” to crops, livestock and fisheries as a result of the storm. The banana crop was almost entirely destroyed by the storm, as have most coconuts and all of the inland cabbage plants and leafy vegetables. Root crops, which are an important local food source, have been uprooted and flooded in most areas, while the majority of fruit trees have been stripped and chickens and pigs have been killed.

As well as crops, most household food and seed stocks and garden production were also destroyed, leaving many families without food and income and increasing the need for imports. With the first harvest from replanted fast-growing food crops likely to be available only in mid-June, Vanuatu could be without locally produced food until then.

It will be some time before the full scale of damages and needs on Vanuatu's more than 80 islands will be known due to a lack of functional communications and limited access following the destruction, according to the UN. However, with 99 per cent of all households on the outer islands dependent on agriculture for consumption needs and income, and with 75 per cent of households in the capital, Port Vila consuming their own produce, the impact will be large.

As a result, the UN agency had announced a $4.8 million humanitarian appeal as part of the wider OCHA request in order to make sure that children and their families in Vanuatu and in affected communities in Tuvalu, Solomon Islands, and Kiribati had access to clean water, sanitation and hygiene and health services including immunisation.

Mr. Boulierac added that UNICEF was already on the ground providing treatment for diarrhoea, care of new-borns and nutrient supplements while also protecting children from violence, exploitation, and abuse. 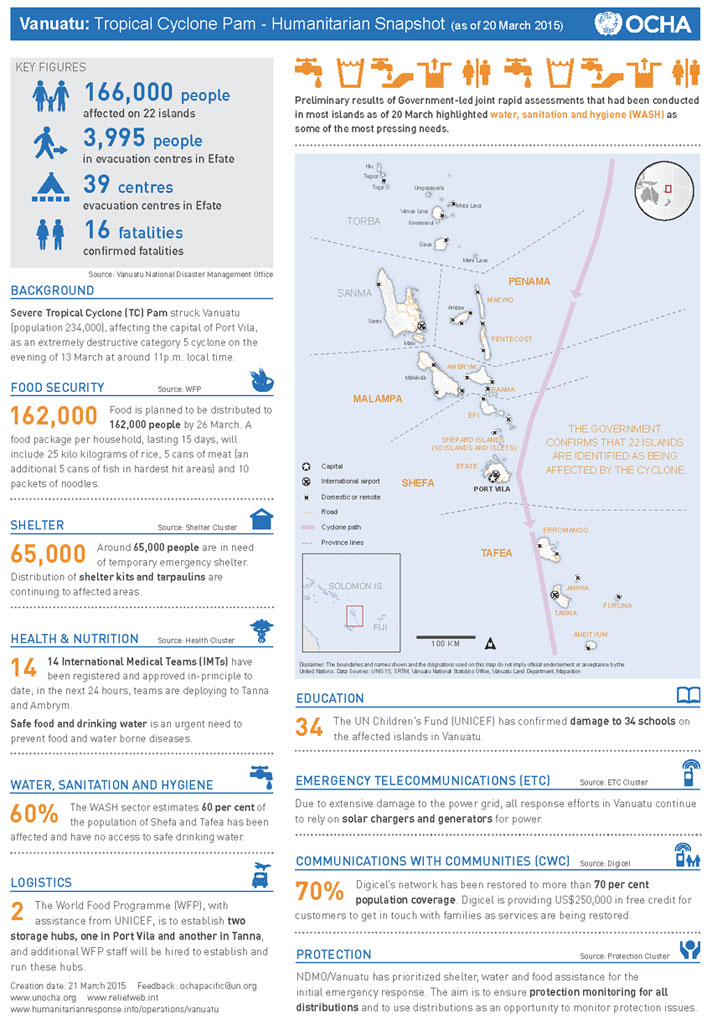 The international community must ramp up financial and humanitarian support for Vanuatu's most vulnerable communities as they begin to rebuild and recover from the devastation wrought by Cyclone Pam, a senior United Nations humanitarian official said today.