The international community must ramp up financial and humanitarian support for Vanuatu's most vulnerable communities as they begin to rebuild and recover from the devastation wrought by Cyclone Pam, a senior United Nations humanitarian official said today.

“As we scale up the aid effort, and as basic services are being rehabilitated and people get back to work, we must ensure that no second emergency develops in Vanuatu from food and water shortages or disease outbreaks,” the UN's humanitarian coordinator for the archipelagic nation, Osnat Lubrani, said in a statement issued earlier today.

The Category 5 tropical cyclone descended upon Vanuatu, Tuvalu and a number of other Pacific islands one week ago battering them with 250kmph winds and 320kmph gusts which caused widespread damage to infrastructure, impacting services such as electricity.

Ms. Lubrani explained that in Vanuatu the storm had left 17 people dead and some 65,000 people homeless.

A UN Disaster Assessment and Coordination (UNDAC) team arrived in the Pacific Ocean archipelago on 16 March and began its work in supporting the Government of Vanuatu in coordinating the humanitarian response, providing some 166,000 people with recovery support.

“Water is a serious problem, with the contamination of water sources a grave health threat, particularly to children. Food stocks are limited as vegetable gardens have been wiped out - a concern for food security and as a source of livelihoods. Several of the health centres and schools have been severely damaged,” she said.

Along with the tragic loss of life and severe infrastructure damage, Cyclone Pam has also heavily impacted Vanuatu's economy which is heavily dependent on agriculture.

An initial assessment by the UN's Food and Agriculture Organization (FAO) has found “extensive damage” to crops, livestock and fisheries as a result of the storm. The banana crop was almost entirely destroyed by the storm, as have most coconuts and all of the inland cabbage plants and leafy vegetables. Root crops, which are an important local food source, have been uprooted and flooded in most areas, while the majority of fruit trees have been stripped and chickens and pigs have been killed.

As well as crops, most household food and seed stocks and garden production were also destroyed, leaving many families without food and income and increasing the need for imports. With the first harvest from replanted fast-growing food crops likely to be available only in mid-June, Vanuatu could be without locally produced food until then.

It will be some time before the full scale of damages and needs on Vanuatu's more than 80 islands will be known due to a lack of functional communications and limited access following the destruction, according to the UN. However, with 99 per cent of all households on the outer islands dependent on agriculture for consumption needs and income, and with 75 per cent of households in the capital, Port Vila consuming their own produce, the impact will be large.

Ms. Lubrani admitted that the widespread disruption of communication and roads would also impact humanitarian efforts and had transformed the UN's relief efforts into “a very challenging logistical operation.”

“Communication within and between the islands is a major challenge, while access to affected areas remains restricted because debris and fallen trees are blocking roads,” she added. “It is also going to be very expensive due to the costs of getting to remote islands and the damage caused to transport infrastructure.”

As a result, she called upon the international community to boost aid and humanitarian efforts for Vanuatu as the country emerges from the disaster.

“We must support the people and Government of Vanuatu as they continue to help the most vulnerable communities and start to recover and rebuild,” concluded Ms. Lubrani. “The United Nations and our partners are ready to continue to help in this effort.” 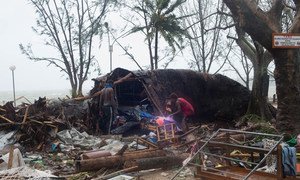