UN Photo
Mourners at a funeral ceremony in Cape Province for those who were killed by the South African police at Langa Township in Uitenhage (1985).
21 March 2015

Marking the International Day for the Elimination of Racial Discrimination, the United Nations today urged Member States to boost efforts towards ending discrimination around the world and ratify a critical international convention aimed at abolishing racism in all its forms.

“We have seen the end of colonialism, the dismantling of apartheid and the rise of a global movement for equality,” United Nations Secretary-General Ban Ki-moon declared in his message for the Day.

“Yet, as history and current events attest, racial discrimination still presents a clear danger to people and communities in all regions.”

The UN General Assembly, in a show of solidarity with the anti-apartheid movement, established this Day to commemorate the 1960 Sharpeville Massacre, when 69 people were killed and many others injured as police opened fire on a peaceful protest against South Africa's appalling pass laws.

In his message, Mr. Ban observed that 2015 marked the fiftieth anniversary of the International Convention on the Elimination of All Forms of Racial Discrimination and the launch of the International Decade for People of African Descent – two cornerstones of the UN's effort to preserve the memory of perpetrated injustices and eradicate intolerance.

He added that learning the lessons of history was critical to avoid repeating the mistakes of the past and an opportunity to renew a commitment “to building a world of justice and equality where xenophobia and bigotry do not exist.”

“Lasting peace can only be built on the premise that all people have equal rights and dignity – regardless of ethnicity, gender, religion, social or other status,” the Secretary-General continued.

“To that end, I urge all nations to ratify the International Convention on the Elimination of All Forms of Racial Discrimination, to promote historical accuracy and put in place robust policies and laws that will end all forms of discrimination as enshrined in the Convention.”

In a statement delivered by the Permanent Representative of Tajikistan, Mahmadin Mahmadaminov, the President of the General Assembly, Sam Kutesa, similarly extolled the importance of learning from “the profound and lasting impacts of historical human rights tragedies” such as slavery, the slave trade, and the oppression of institutionalized racism.

“We should draw important lessons from these past tragedies, so that we may use this knowledge to address contemporary manifestations of racism and racial discrimination,” said Mr. Kutesa. “Prejudice must not be allowed to rake root in our societies. All human beings are born free and equal in dignity and rights.”

Calling upon all Member States and global citizens “to continue to reject and prevent discrimination” in all its forms, the General Assembly President urged the international community to do its best in preventing the growth and spread of xenophobia, stereotyping, hatred and marginalization which, he said, have “the potential to compromise peace, stability and development around the world.”

♦ Receive daily updates directly in your inbox - Subscribe here to a topic.
♦ Download the UN News app for your iOS or Android devices.
intolerance 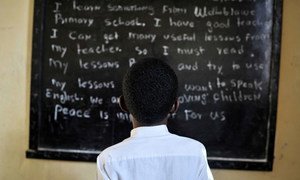 To mark the International Day for the Elimination of Racial Discrimination, the United Nations is calling on the world, especially political, civil and religious leaders, to draw strength from the legacy of the late Nelson Mandela, who waged a lifelong battle against prejudice and messages and ideas based on racism, racial superiority or hatred.