UNAMA/Fardin Waezi
Afghans celebrate Nowruz – New Year – with special meals, decorations and gifts and it's a time for renewal and for promoting peace and solidarity.

Nowruz takes place this year as the United Nations works to shape a new vision for a sustainable future and adopt a meaningful universal climate agreement, Secretary-General Ban Ki-moon said, calling the ancient celebration of spring “a moment of unity and solidarity, within and among societies, that is all the more important at times of strife and division.”

“The annual observance of Nowruz is a wonderful opportunity for people to join together to celebrate cultural diversity, dialogue and mutual respect,” the UN chief said in his message for the International Day of Nowruz.

“These priorities for 2015 are in line with the spirit of Nowruz, which promotes harmony with nature and all peoples to foster cooperation for lasting peace,” Mr. Ban added.

Nowruz, which marks the first day of spring and the renewal of nature, is celebrated by more than 300 million people all around the world and has been celebrated for over 3,000 years in the Balkans, the Black Sea Basin, the Caucasus, Central Asia, the Middle East and other regions. It promotes values of peace and solidarity between generations and within families as well as reconciliation and neighbourliness, thus contributing to cultural diversity and friendship among peoples and different communities.

The International Day was proclaimed by the General Assembly in 2010, at the initiative of several countries and in 2009, Nowruz was inscribed on the UN Educational, Scientific and Cultural Organization (UNESCO) Representative List of Intangible Cultural Heritage of Humanity.

“Nowruz plays a significant role in strengthening the ties among peoples based on mutual respect and the ideals of peace and good neighbourliness,” said Mr. Ban.

“This age-old celebration of diversity, dialogue and solidarity brings together peoples of many different cultures, religions and languages, joining families and communities together,” said Irina Bokova, UNESCO's Director-General.

“Nowruz has given rise to a rich horizon of customs, rituals and festivities that are often associated with nature and fertility. The songs, dances, festive meals and other social practices that form an integral part of Nowruz provide vivid demonstration of the creative diversity that UNESCO seeks to promote in all of its work,” Ms. Bokova added.

“In these uncertain and turbulent times, let us all embrace the values of Nowruz and carry forward its message of peace, harmony, tolerance and reconciliation.”

Nowruz promotes sense of fresh possibility, ‘a chance to renew our commitment to peace’ – UN chief 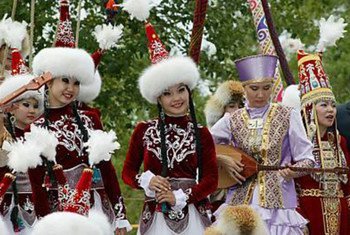 21 March 2014
At this time of global change, when all societies face new pressures, the need for solidarity between all people and harmony with the planet has never been more essential, United Nations Secretary-General Ban Ki-moon said today, calling on the international community to promote these essential values in the spirit of the annual spring festival of Nowruz.