OCHA/EmanAl-Awami
Damage to property and infrastructure caused by fighting between Government troops and militants is estimated at 95 per cent in some areas of Yemen.
20 March 2015

Secretary-General Ban Ki-moon has strongly condemned the terrorist attacks against two mosques in Yemen today that have reportedly left dozens of people dead and wounded.

According to media accounts, two suicide bombers targeted the mosques in the country’s capital, Sana’a, during Friday prayers, killing at least 126 people and wounding scores of others. The terrorists also attacked a government building and mosque in Sa’dah, in the country’s northwest.

The Secretary-General, in a statement issued by his spokesperson, deplored the killing of civilians and called on all Yemeni sides “to immediately cease all hostile actions and exercise maximum restraint.”

Yemeni stakeholders are currently involved in UN-brokered talks to help facilitate peace in the country.

The statement said all sides must abide by their stated commitments to resolve differences by peaceful means, and should engage in good faith in the ongoing UN-facilitated negotiations in order to reach a consensus agreement.

“The Secretary-General urges all to remain fully engaged with his Special Adviser on Yemen so as to enable him to continue to exercise the Secretary-General’s good offices in close cooperation with the members of the GCC [Gulf Cooperation Council] and the Security Council.”

The Secretary-General’s Special Adviser on Yemen, Jamal Benomar, expressed his strongest condemnation of the attacks in a statement issued in Sana’a.

“The phenomenon of targeting mosques on sectarian grounds is a serious indicator of the deterioration of the security situation. This is also a sign that the current political impasse may cause a societal rift that threatens Yemen’s cultural fabric as well as its unity, security and stability,” he said.

“Such serious developments require everyone, primarily the political parties and constituencies, to bear full responsibility and to engage with seriousness, responsibility and good faith in the ongoing negotiations in order to save Yemen from the cycle of strife, sectarianism and disintegration it is currently descending towards,” Mr. Benomar added.

The Security Council, for its part, condemned “in the strongest terms” a series of recent airstrikes against the Presidential Palace in Aden and attacks at Aden International Airport.

In a press statement, the Council underlined that President Abdo Rabbo Mansour Hadi is the legitimate authority based on election results. It also called for all parties in Yemen “to adhere to resolving their differences through dialogue and consultation, reject acts of violence to achieve political goals, and refrain from provocation and all unilateral actions to undermine the political transition.”

Moreover, the Council echoed the Secretary-General in calling on all parties to engage in “good faith” and accelerate the UN-brokered negotiations to continue the political transition in order to reach a consensus solution. 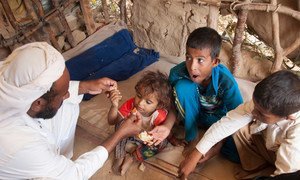