“Peace, prosperity, lives of dignity for all – this is what we seek. We want all men, women and children to enjoy all their human rights. We want all countries to know the pleasure of peace,” the Secretary-General said in his message for the Day.

“We want people and planet alike to be blessed with sustainable development, and to be spared the catastrophic impacts of climate change.”

In July of that year, the UN General Assembly proclaimed 20 March the International Day of Happiness, recognizing the relevance of happiness and well-being as universal goals and aspirations in people's lives and the importance of their recognition in public policy objectives.

As part of its effort to emphasize the importance of happiness in daily life, the UN along with global music streaming service MixRadio has launched the #HappySoundsLike campaign, appealing to the global citizenry “to nominate a song that brings a smile to your face.”

The campaign seeks to seize the power of music and “inspire hope for a better tomorrow” as it encourages people to suggest songs that best represent the feeling of happiness.

Mr. Ban nominated his Messenger of Peace Stevie Wonder's song “Signed, Sealed, Delivered” to the playlist, adding that to him #HappySoundsLike a new climate deal and an agreed set of sustainable development goals, both on the agenda of world leaders for later this year.

“Let us give thanks for what makes us happy,” Mr. Ban stated. “And let us dedicate our efforts to filling our world with happiness.”

♦ Receive daily updates directly in your inbox - Subscribe here to a topic.
♦ Download the UN News app for your iOS or Android devices.
Happiness 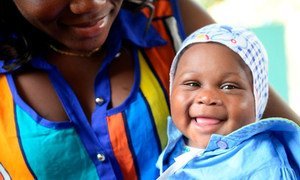 Does happiness have a sound? And, if so, what does it actually sound like?