World Bank/Dana Smillie
The Bardo Museum in Tunis, the capital of Tunisia, undergoing restoration and renovation in June 2010.
18 March 2015

Senior United Nations officials have condemned today’s attack against the Bardo Museum in the Tunisian capital which resulted in a number of deaths, and voiced solidarity with the Government and people of the North African nation.

In a statement issued by his spokesperson, Mr. Ban conveys his deepest condolences to the families of the victims of what he called a “deplorable act.”

According to media reports, 19 people, including 17 foreign tourists, have been killed in the gun attack on the museum, located in central Tunis.

Irina Bokova, Director-General of the UN Educational, Scientific and Cultural Organization (UNESCO), spoke of the attack during a meeting with French President Francois Hollande at the Louvre Museum in Paris. The two leaders were addressing media on the destruction of cultural heritage by extremist groups.

“The Bardo Museum is a place open to all; a place of discovery and dialogue between cultures. This cowardly act is a denial of these principles and must unite us even more in the combat against extremism,” she stated in a news release.

“Confronted with those who seek to choke off human spirit by violence and terror, we must respond by dialogue, culture and respect for human rights,” she added.

Also speaking out was the Secretary-General of the UN World Tourism Organization (UNWTO), Taleb Rifai, who said that this act of violence deserved the condemnation of the international community.

“As part of the global tourism family, we are shocked by these horrible attacks. The relatives and friends of the victims are in our thoughts and we once more convey our solidarity with the people and the Government of Tunisia,” he said in a news release.

“Tourism is a lifeline for the economy of Tunisia and we will continue our support to ensure that tourism continues to provide development opportunities to its people.”

In a statement issued to the press, the UN Security Council also condemned the “heinous” attack and expressed its deepest condolences to the families of the victims and to the Government of Tunisia and other relevant governments who lost their citizens.

“The members of the Security Council stressed that no terrorist attack can reverse the path of Tunisia towards democracy and all efforts directed towards economic recovery and development,” the 15-member body added.

♦ Receive daily updates directly in your inbox - Subscribe here to a topic.
♦ Download the UN News app for your iOS or Android devices.
Ki-moon|attack 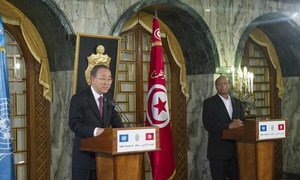 Secretary-General Ban Ki-moon arrived in Tunisia early this morning where he met with President Moncef Marzouki to pledge full United Nations support for the north African nation in its forthcoming elections and transition to democracy.