The United Nations Special Rapporteur on the human rights situation in Myanmar today called on the country’s authorities to address ongoing challenges to the democratic reform process “before they undermine the success achieved so far.”

“I was very disturbed by reports on 10 March that excessive and disproportionate force had been used against students and other civilians and that 127 people were subsequently arrested,” Ms. Yanghee Lee said during the presentation of her first report to the UN Human Rights Council in Geneva.

She welcomed the release of some detainees but also called for the immediate release of all the others. Further, Ms. Lee drew attention to the pressure on human rights defenders, including prosecutions under outdated defamation and national security laws, which have a “chilling effect on civil society activities.”

“I am concerned journalists are still being interrogated and arrested, and that 10 journalists were imprisoned in 2014. This needs to stop if Myanmar wants to create a meaningful democratic space,” Ms. Lee said in a news release.

While noting that economic development had benefited some in the country, the expert urged the Government to ensure that “others are not left out” and called for “a human rights-based approach to development programmes.”

Ms. Lee also expressed concern over the alarming escalation of fighting in the Kokang region, where over 100 civilians are reported to have died and tens of thousands have been displaced.

“Even during a state of emergency, the Government has an obligation to strictly uphold fundamental human rights,” she reiterated.

More needs to be done to address the underlying issues at the heart of the conflicts, including discrimination against ethnic minorities. Four bills currently before Parliament risk increasing tension, she emphasized.

“During my last visit in January 2015, I witnessed how dire the situation has remained in Rakhine state. The conditions in Muslim IDP [internally displaced persons] camps are abysmal and I received heart-breaking testimonies from Rohingya people telling me they had only two options: stay and die or leave by boat,” she said.

The expert cautioned against any provision in the Rakhine Action Plan that would classify Rohingyas as ‘illegal aliens’ and subject them to possible prolonged internment in camps or removal from the territory. The expiry at the end of this month of the temporary white cards held by many Rohingyas as identity documentation “further increases their vulnerability,” she said.

Special Rapporteurs are part of what is known as the Special Procedures of the Human Rights Council. They are not UN staff, do not receive a salary for their work, and are independent from any government or organization. 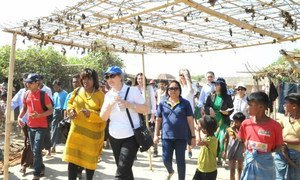 The United Nations remains committed to helping Myanmar achieve its humanitarian and development needs in order to boost living standards for all its citizens, top UN officials have declared during their visit to the Asian country.