FEATURE: Academic who ‘puts his feet on the ground and works with people’ wins 2015 UN award for disaster risk reduction

A researcher who describes his work as “a life project of teaching, research and dissemination of ideas” has won the 2015 United Nations Sasakawa Award for Disaster Risk Reduction.

Highly respected disaster risk reduction researcher and practitioner, Allan Lavell, was awarded the 2015 Laureate for being “a leader in the disaster risk management community” during work that has spanned more than three decades.

He received the award this evening is a special ceremony held in connection with the Third World Conference on Disaster Risk Reduction, running in Sendai, Japan, through Wednesday, 18 March.

Born in the United Kingdom, Mr. Lavell has spent most of his career in and focused on Latin America. He is a founding member of the Network of Social Studies in the Prevention of Disasters in Latin America (LA RED).

Ahead of the ceremony, he spoke to the UN News Centre saying he was amazed that he had been nominated for the award and felt that it was a recognition of something that went beyond him and included many other people working hard in the field.

Recalling his his long-term association with the Latin American Social Science Faculty (FLACSO), he said that while he had gotten into the disaster risk reduction field “by one of those chance occurrences,” he had, over the years, carried out many research projects and training courses on the general topic of how risk is generated in society and what are the most adequate mechanisms for intervening in risk.

“I don't have 'a' project”, continued Mr. Lavell, explaining he rather had “a life project of teaching, research and dissemination of ideas. New ideas, I hope." he also worked a lot with the UN Office on Disaster Risk Reduction (UNISDR), particularly on its flagship Global Assessment Report GAR. “I'm in the world of an academic who's not just and academic, but one who puts his feet on the ground and works with people.”

Spotlighting areas of professional pride, he noted that as a university teacher and researcher, he has seen those who have been introduced, encouraged and inspired in some way, go on to “become active, imaginative and committed members of the disaster risk management community in many different walks of life.”

He also believed that he has persisted in and advanced in breaking down disciplinary barriers and sectoral views of disaster risk in order to construct more integral and holistic views in the frame of development.

“If I'm know for anything in Latin America it's for thinking conceptually; for thinking how [disaster risk reduction] should be dealt with. A lot of the new laws in Latin America are based on the precepts and concepts that I've developed over time,” he said, describing his work with governments and intergovernmental agencies, as well as civil society, where he had helped formulate processes around local risk management.

The Head of the Sasakawa Jury, Prof. Murat Balamir, told the ceremony that Mr. Lavell bore the hallmark of excellence demanded of this year's award – themed 'Shaping the Future' – demonstrating a combination of influence, reach, permanency, innovation, efficiency and collaboration.

“The enduring and most influential individual effort of Mr. Lavell, in undertaking various roles in a multi-actor environment, makes him 'a leader in the DRM [Disaster Risk Management] community',” Prof. Balamir said in his address at one of the signature events at the Conference.

“Personally accessible to all, Mr. Lavell has been capable of tailoring official conduct according to the needs of the local communities, enabling them, and always highlighting the human needs. This has been a 'glue to hold together disparate communities'. This is a timeless model; a model for all times.”

The Sasakawa Jury also awarded Certificates of Distinction to two other nominees. First, Jeffrey Town Farmers' Association of Jamaica, which was created in 1991 to use agriculture as a platform for sustainable development and as a means to redress risk and a lack of investment in marginalized areas.

Ahead of the award ceremony, Director of the Association Ivy Gordon said: “It is truly humbling to know that our efforts to increase our own resilience and those around us should place a traditionally marginalized community on the world stage. We are proud because we didn't begin or continue for glory, we did this for survival and quality of life.”

She told the UN News Centre that the Association felt “like were winners already. We always want to say that ours is not a project but a process; we've been doing things, little by little to try and make our lives less vulnerable.”

Expanding on this, she said, we live in 'Hurricane Alley,' using the nickname given to the infamous area of warm water in the Atlantic Ocean stretching from the west coast of northern Africa to the east coast of Central America and Gulf Coast of the Southern United States a historical breeding ground for tropical storms.

“We live on top of a hill that is unstable. And so we have done, collectively with resources form a variety of partners, little things that have added layer-by-layer to increase our own resistance to make us better able to live in this world,” she said.

The Second Certificate of Distinction was awarded to the Australian Business Roundtable for Disaster Resilience and Safer Communities, which brings together six leading CEOs – of the Australian Red Cross, Insurance Australia Group, Investa Property Group, Munich Re, Optus and Westpac – to influence public policy via evidence-based reporting on the unsustainable cost of disasters on life, property and the economy.

Speaking on behalf of the Roundtable before the ceremony, Australian Red Cross CEO Robert Tickner said: “The great achievement of the Roundtable is to help put resilience right up on the agenda of Government and help convince them that investment up front in disaster preparedness will strengthen communities and save lives as well as huge costs in the longer term.”

He told the UN News Centre that all around the world, there is common agreement that Governments need to invest more in disaster risk reduction and building resilience.

“But the truth is, as a planet, we have not been successful in shifting Governments' policy positions. Yet, in Australia we've got a breakthrough because we've got the Red Cross working with the business community sending a united and powerful message to the Government about the need to shift their expenditures to protect the people before disaster strikes, and that a huge step forward.”

Asked how he felt about the ceremony and he said: “Well it's a bit like the Oscars, isn't it? I'm very nervous. I'm looking forward to the results, but to be perfectly honest, its such a humbling and privileged experience to go all around the world in such wonderful company of so many organizations and so many people working hard in their own communities to protect people and build disaster resilience. It's really a life privilege.”

Yohei Sasakawa, Chairman of The Nippon Foundation, which sponsors the award, told the ceremony that disasters are taking place around the world “with unsettling frequency, disrupting the lives of individuals with oftentimes irreversible consequences”.

“As an organization specializing in humanitarian aid, the Nippon Foundation has been engaging in disaster relief and recovery not only within Japan but overseas for many years,” Mr. Sasakawa said.

“Having firsthand experience of the grave impact that disaster has on human life, we established the Sasakawa Award programme with the United Nations 30 years ago,” he said, adding that the aim was to establish a global platform where knowledge and experience can be polled, shared and utilized to reduce the impact of natural disasters for all people.

“Over the decades, disaster risk reduction has moved from a narrowly perceived technical discipline, to a more broad-based global movement with a focus on sustainable development.

The Special Representative of the Secretary-General and head of the UNISDR, Margareta Wahlström said: “In our community, there is a lot going on, all the time. As a reflection of this, the disaster risk reduction community nominated 88 individuals and organizations (from 44 countries) for the Sasakawa Award this year. Thank you for that.” 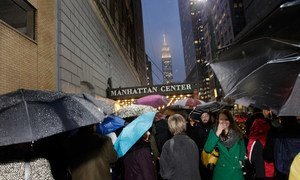