UNICEF: on disaster resilience, ‘we must listen to those who know their communities’

Children and youth are a major part of community-level responses to disasters and must play an important role in risk reduction, United Nations officials said today in Sendai, Japan, with the head of the UN Children's Fund (UNICEF) challenging a gathering of youth representatives to demand that they be involved in processes that impact them.

“We cannot prevent floods, droughts and storms but with better planning, preparation and response, these things don't have to become disasters – and they won't, if we listen to those who know their local communities the best,” UNICEF Executive Director Anthony Lake told a side event in Sendai, Japan, as part of the Third World Conference on Disaster Risk Reduction.

Taking up the title of the event – 'Children and Youth - Don't Decide My Future Without Me' – to challenge the energetic participants, Mr. Lake said every child in every community deserves every opportunity to thrive. Disaster preparedness must reflect needs of every child everywhere. Let us be involved! Demand it!”

Illustrating the vital need for such participation, he said that since the end of the 1990's, climate change-related disasters affected some 60 million children, while in the coming decades, that number was expected to rise to 200 million, putting even more children at risk of dying, being out of school and facing risk of trafficking and exploitation. And indeed, it was the poorest, most isolated and most vulnerable that would be most at risk.

Yet there has been some solid progress, including in the Sendai area, which was devastated in 2011 by a tsunami and flood. Evacuation drills, teacher training and preparation of emergency packs were but a few examples of the programmes under way in local elementary schools.

Spotlighting other examples, he said community-based health care in Niger had saved some 60,000 children in 2009 alone; early warning systems and cyclone-resistant classrooms in Madagascar had ensured that no child died in a disaster-related incident there since 2006.

In many areas, children and youth were getting involved, said Mr. Lake, noting that in Nepal, children's maps of their communities and schools had been included in preparedness exercises.

Ahmad Alendhawi, UN Special Envoy for Youth, who moderated the event, said children and youth have proven that they are “part of the response and part of the solution”

“Young people and children are not coming to [intergovernmental negotiations] to be cool,” he continued, explaining that boosting youth participation has been a major shift in the way the United Nations is doing business. “Engaging young people in a systematic way is not a seasonal exercise; half of the world population is under 25 years of age,” so it would benefit no one to ignore this. 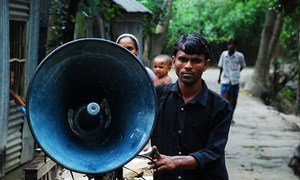 When disaster strikes, the surest way to save more lives is to get targeted, practical information quickly out to communities, United Nations experts told delegations gathered in Sendai, Japan, but stressed that even the most technically impressive systems “are useless” if people are not reached or do not understand the warning.