With reports slowly emerging about the damage wrought in Vanuatu, which suffered the brunt of Cyclone Pam that pummeled the South Pacific over the weekend, leaders from the region made a joint call today from a United Nations conference on disaster resilience for scaled-up storm recovery efforts, as well as durable partnerships that would help their countries strengthen capacities to deal with such extreme weather events.

Kiribati, Tuvalu and the Solomon Islands were also battered by the Category Five storm, and Aunese Makoi Simati, Tuvalu's Ambassador to the United Nations told reporters in Sendai, Japan, where he is attending the Third World Conference on Disaster Risk Reduction, that while the winds had begun to die down, the damage in his country's northern islands, as well as Vanuatu, is immense.

“The word 'vulnerable' goes hand-in-hand with the words 'small island,'” he said, expressing sympathy and solidarity with all the affected islands and neighboring atolls. Ambassador Simati said that when Pacific Islanders are asked 'why can't people go to higher ground?' 'why can't people just move somewhere else?', the reality is that they simply cannot.

“There is no high ground. Tuvalu is less than three metres above sea level. Our islands are flat…the highest building is only three stories. The islands are small, so 'moving' means just going to the other side,” he explained.

He noted somberly that in the wake of Cyclone Pam, which had inundated villages and destroyed cemeteries, “we feel that even the dead are calling for help” as island nations like Vanuatu and Tuvalu struggle to cope with and plan for natural disasters, which are increasing in frequency, intensity and duration.

The aim of the Sendai Conference, which wraps up tomorrow, 18 March, is to update the landmark Hyogo Framework for Action (HFA), itself crafted in the wake of the devastation of the Indian Ocean tsunami in January 2005. Climate change adaptation and mitigation measures, as well as the specific vulnerabilities faced by small island developing States, have emerged as key priorities during the discussions in Sendai.

On that point, Ambassador Simati noted the vast distances that must be covered to investigate the damages in remote islands in the wake of the cyclone. New Zealand and Australia are sending planes to survey the area, because it would take boats about two days to reach outlying islands.

“The issue of disaster risk reduction is very close to our hearts – from [Sendai] to Christchurch and the Pacific Islands, we are all in the most disaster-prone region on earth,” he said, and while international action plans such as the Samoa Pathway are in place, when disaster strikes, mobilizing help under sever resource constraints, with vast distances to cover and no telecommunications links, remains a deep challenge.

Faamoetauloa Tumaalii, Minister of Natural Resources and Environment of Samoa, echoed that sentiment, stressing that small island governments, especially in the South Pacific, need development partners to support projects to strengthen disaster resilience. Without such support, “it will take a long time to build these capacities.”

The priority is on finance, he said, noting that small island developing States need easy access to such UN-backed mechanisms as the Green Climate Fund. Indeed, he was echoing “loud calls” from the Pacific that there is too much red tape to gain access to such funds.

Another top priority is ensuring “sustainable development of small island States through genuine and durable partnerships,” as set out in the 'Samoa Pathway', as the outcome of the Third UN Conference on Small Island Developing States, adopted last year in Apia, Samoa, is informally known.

Picking up that thread, Ambassador Simati encouraged the international community to be flexible, stressing that while there are universally agreed frameworks, such mechanisms must address ground-level realties for small islands. Rather than operating by “remote control” when it came to dealing with countries like his, he said actions and strategies must take into account specific vulnerabilities.

“Our faith carries us through and we do what we can…with our families often carrying out the initial [disaster response],” but, he said, sea-level rise is real threat, the impact on food security is real, and affected countries need international assistance and partnership.

Noting that some countries had purchased land in other States, not only to counter the impacts of climate change but also to gain arable land for farming, Ambassador Simati said Tuvalu had not followed that path. “We don't want to give the signal that we are giving up on our country. We can't be called Tuvaluan if we live in another country.”

Tai Tura Associate Minister for Foreign Affairs and Immigration of the Cook Islands said Government surpluses were devoted to disaster resilience. The Government also devoted resources to mitigate the risks of disaster posed to the tourism industry, which was the Cook Islands' man source of income. It had also devoted resources and legislation to protect its surrounding marine environment. 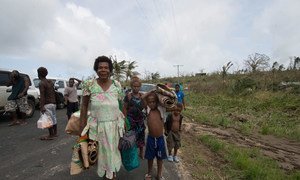 With United Nations relief agencies stepping up their response in Vanuatu after the country was hit by Cyclone Pam, Secretary-General Ban Ki-moon said today that the event “tragically underscored” the importance of global efforts on disaster risk reduction.