Does happiness have a sound? And, if so, what does it actually sound like?

That is the question the United Nations is asking as it launches its latest campaign – #HappySoundsLike – an appeal for the global citizenry “to nominate a song that brings a smile to your face” ahead of this year’s International Day of Happiness, observed annually on 20 March.

Spearheading the effort, Secretary-General Ban Ki-moon’s video contribution urges viewers around the world to ‘Be happy!’ in the UN’s six official languages and join the Organization’s call for people to demonstrate their solidarity with those “facing tough challenges.”

“On this day we are using the universal language of music to show solidarity with the millions of people around the world suffering from poverty, human rights abuses, humanitarian crises and the effects of environmental degradation and climate change,” he stated in a news release.

The campaign, made possible with the support of global music streaming service MixRadio, seeks to seize the power of music and “inspire hope for a better tomorrow” as it encourages people to suggest songs that best represent the feeling of happiness.

Mr. Ban nominated his Messenger of Peace Stevie Wonder's song “Signed, Sealed, Delivered” to the playlist, adding that to him #happysoundslike a new climate deal and agreed set of sustainable development goals, both on the agenda of world leaders for later this year.

Jyrki Rosenberg, Head of MixRadio, said the music service is privileged to support the UN for this campaign. “We hope the general public follow in the steps of the array of global stars and share the track that makes them happiest.”

This year will mark the third observance of the International Day of Happiness, which recognizes the relevance of happiness and well-being as universal goals and aspirations in people’s lives and the importance of their recognition in public policy objectives.

♦ Receive daily updates directly in your inbox - Subscribe here to a topic.
♦ Download the UN News app for your iOS or Android devices.
happy 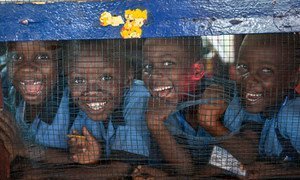 Marking the International Day of Happiness with calls to promote social inclusion and intercultural harmony, senior United Nations officials today urged the global community to make real the UN Charter’s pledge to end conflict and poverty and ensure the well-being of all.