A film chronicling the monumental effort of the engineers and designers to rebuild entire new cities from scratch following the devastating 2008 earthquake in China's Sichuan Province, took the top prize at the first United Nations co-organized International Awards for the Best TV Documentaries on Disaster Risk Reduction.

During a special ceremony at the Third World Conference on Disaster Risk Reduction, the documentary Rebuilding Sichuan recived the inagural award, besting competition that included films on topics that ranged from floods in Pakistan and Great Britain to the devastating earthquake and tsunami that struck the communities in Japan's northeast region in 2011.

Producer Sen Zhang collected the award for the film, broadcast on Discovery Channel. In one scene, a resolute official is featured pledging “the earthquake resistance of the buildings must be strengthened” before a huge redevelopment model.

“I knew there are three nominated films. I admire them, but hoped we would eventually win the award. I was confident and full of expectation. We finally won. I am excited, very excited,” Mr. Zhang told UN Radio after reciving the honour.

The awards aim to honor those filmmakers, producers and broadcasters that are working to make documentaries that can help to protect vulnerable communities from the risks posed by future disasters.

This is has been a recurring theme at the Conference, which has been running in Sendai, Japan, since Saturday and wraps up Wednesday 18 March, with delegations expected to adopt a new international framework for managing disaster risk which will reduce mortality and curb economic losses.

The UN Office for Disaster Risk Reduction (UNISDR), together with its partners, the Asia Broadcasting Union (ABU) and the European Broadcasting Union (EBU) chose the winners from among nearly 100 films that have been broadcast on television since 2005.

Natalia Ilieva, from the ABU, said UNISDR should be congratulated for initiating this first international competition for documentaries on reducing disaster risks. “Among all the nominated films there is a great wealth of stories…Hopefully these new awards will inspire even more producers to tell these difficult stories so we can try to make disaster risk reduction education a part of everyday programming,” she added.

Ms Leoni said: “The selection process was very difficult. We received many excellent documentaries. Making a film about such a serious issue like disaster risk is not easy and requires a mix of technical skill and compassion to tell these stories in a compelling way.”

The Kamaishi Miracle, by NHK (Japan Broadcasting Corporation), won the Best Human Story Category. It recounted how 184 students from a school survived the 2011 earthquake and tsunami. Senior Producer Ms Kazuyo Fukuda said: “It is a great privilege to be here and to share this great honour with the students and teachers of the school.”

It's Time by GMA Network Philippines won Best Investigative Story. The film profiles the frenetic pace of modern life and asks 'could nature itself be up against a deadline' to highlight the over-consumption of the planet's natural resources.

Executive Producer Richelle Figueroa said: “These awards should set the agenda and highlight the importance of disaster risk reduction for vulnerable countries around the world such as the Philippines.”

Vets in the Disaster Zone by Dragonfly Film and Television Productions won the Most Innovative Documentary category. In one scene from the film, Philippines farmers corral pigs – using plastic sheeting in an innovative technique which moves the animals' pen along with them, keeping them calm and stress free – as the narrator intones: “Moving animals quickly and calmly in a disaster is vital if you want them to survive.”

World Animal Protection was a partner in the film. Director of Disaster Management James Sawyer picked up the award. “The people and animals of the Philippines showed great resilience to come back after the disaster. It shows that resilience really is a state of mind,” he said.

Host of the ceremony, international broadcaster Veronica Pedrosa, said: “This year's awards reveal a truly global picture of disaster reduction efforts – from flooding in Pakistan and Great Britain to the devastating earthquake and tsunami that struck the communities in Japan in 2011.” 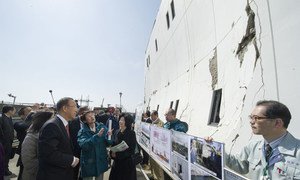 Integrating disaster risk reduction into development can save lives and livelihoods, United Nations Secretary-General Ban Ki-moon said as he toured Sendai, Japan, which was devastated four years ago by an earthquake and tsunami but which today, following an impressive rebuilding effort, is a reminder to the world that “we must turn all of the painful lessons of disasters into new policies for a better future.”