Meetings in Morocco arranged by the United Nations that brought together participants in the Libyan political dialogue have concluded today, having covered substantive and procedural issues on the way forward.

The UN Support Mission in Libya (UNSMIL) has proposed resuming the political dialogue next Thursday, 19 March, in Morocco, with the time between to allow for more consultations and further work on the draft documents that were presented in the earlier discussions.

“This is a dialogue, whose purpose is to reach a solution and to reach a solution because Libya cannot wait anymore,” the Special Representative of the Secretary-General and head of UNSMIL, Bernardino Leon, told a news conference after the meetings ended. “The Mission hopes that the parties will come back next Thursday ready to address the final stage of the talks.”

In Morocco, participants renewed their commitment to the dialogue as the sole mechanism for the resolution of political differences and noted the need to work quickly to reach agreement to draw Libya out of its crisis and bring peace and stability.

“The crisis in Libya is deepening in all aspects, in political security, economic and financial aspects,” Mr. Leon said. “We have conveyed to the parties a sense of urgency. Libya has no time.”

He said the Mission looked forward to active engagement from all participants during the upcoming sessions and urged them to seize the momentum generated by the dialogue held from 5 to 7 March, build on the progress made and not waste the opportunity the talks provide to bring peace to their country.

“For this final phase of the talks, this decisive phase of the talks, the House of Representatives has decided to reinforce their team,” he said. “We believe from now until Thursday is time enough to get strong support, to prepare well their position on every document they have and to be ready to address something as complex, difficult and challenging as national unity government.”

UNSMIL and the participants in the dialogue also emphasised the importance of other tracks in support of the main dialogue track.

“Progress made on those tracks serves to boost the overall efforts towards a political solution,” the Mission said in a news release. “These tracks include meetings of representatives of political parties and political activists, representatives of municipalities as well as armed groups and tribal and societal personalities.” 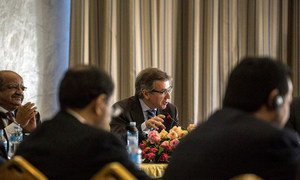 Several Libyan political parties and personalities concluded a two-day meeting today in Algiers, during which United Nations envoy Bernardino León reiterated the resolve of the world body to continue the dialogue until it reaches positive outcomes.