12 March 2015
Actress Geena Davis today told a standing-room only event on gender and the media at the United Nations that the paucity of female characters in entertainment media for young children can be changed overnight, saying: “We don’t have to fix the ‘unconscious bias’ they are raised with later on. We can fix it from the very beginning.”

The Academy Award-Winning Actor, who founded the Geena Davis Institute on Gender in Media, said the data from her research shows “disturbing” results of how “profoundly fewer” female characters are in family movies and television programmes aimed at young children under the age of 11.

Ms. Davis, known for her portrayals of strong female characters in films such as “Thelma and Louise,” went on to say the message the children were getting through entertainment media was of “hyper-sexualized” female characters judged by their appearance.

“If we added female characters at the rate we have been over past 20 years, we will achieve parity in 700 years,” Ms. Davis said, adding that she believed gender parity in children’s entertainment media can be reached dramatically faster – possibly even seven years.

She noted that the message kids are getting through entertainment media is that women and girls are second class citizens.

“There is one sector where this gross imbalance can be changed overnight and that is on screen,” she said. “We don’t have to fix the unconscious bias they are raised with later on. We can fix it from the very beginning.”

Ms. Davis was speaking at an event on the side lines of the 59th session of the Commission on the Status of Women taking place at UN Headquarters to promote gender equality in and through the media, as central to the so-called post-2015 Sustainable Development Goals that will drive the global development agenda for years to come.

Irina Bokova, Director-General of the UN Educational, Scientific and Cultural Organization (UNESCO), in remarks read by one of her deputies, said women represent “just third of reporters, and quarters of media decision makers.”

“Only a quarter of people questioned, heard or seen or read about in the media are women,” according to Ms. Bokova. “How can we get the whole full story with only half of the world’s voices? We do need to redress this imbalance.”

Phumzile Mlambo-Ngcuka, Executive Director of UN Women, which co-hosted the event with UNESCO, and Ms. Bokova agreed on the imperative to change the underlying stereotypes of women.

“Progress is not the same as success,” the UNESCO head said. 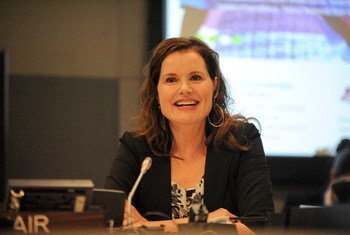 22 September 2014
Nowhere to be “scene,” women protagonists have less than one-third of all speaking roles in film and are largely absent from powerful positions, according to a United Nations-backed survey released today which argues for the involvement of more female film-makers in the industry, and for greater sensitivity to gender imbalance on screen.