At an event held today on the fringe of the United Nations Commission on the Status of Women, panellists addressing the continuum of violence against women underlined the importance of making cultural changes in societies to eradicate the scourge of gender-based violence, with a particular focus on engaging men and boys in national efforts to tackle the problem.

The Executive Director of UN Women and chair of the event, Phumzile Mlambo-Ngcuka, described the wide array of abuses perpetrated against women and acknowledged global progress in passing laws to address gender-based violence. At the same time, she stressed that the most important focus of anti-violence efforts was on changing norms in societies in order to truly effect change.

“Boys exposed to violence are three times more likely to use violence against their partner,” she said, noting that the effects of violence against women are felt from generation to generation. “We cannot change social behaviour in societies where overall attitudes and culture don’t change.”

A comprehensive, multisectoral approach was needed, involving parliaments, civil societies and men and boys, among others, in order to ensure the effort “covers all bases,” she said.

Currently, legislation existed but implementation remained “very weak.” Too many women still lacked access to justice, even if laws were in place, and she underscored the importance of zero tolerance in dealing with those who break the law and commit violence against women, as such an approach was essential to preventing its continuation.

Failure to address societal norms meant legal changes were unable to have their desired impact and the stasis continued to erode the progress that passing of such laws was supposed to bring about.

“When we talk about culture and norms, we are not just talking about traditional cultures as we understand them in rural areas and traditional societies,” she said. “It is also as in online culture, as in the entertainment business. Wherever [culture] is, it always seems to support violence against women.”

Men are vital to changing the culture. Given their currently enhanced status in societies around the world, they were often “penholders,” holding the majority of positions as Heads of State, CEOs, religious leaders and other prominent positions.

“A man must say – ‘I will not marry a child. I will not beat up a woman,’” she said, adding, “‘I will not accept a paycheque higher than my female counterpart.’ Then we’re talking. That’s what we’re calling for in ‘HeForShe’– extraordinary activities at all levels.”

Ms. Mlambo-Ngcuka went on to describe UN Women’s partnerships, notably with the UN Population Fund (UNFPA), to develop robust, accessible services for women and girls and that theme was taken up by Babatunde Osotimehin, the Executive Director of that agency.

“The issue is about men as much as about women,” he said. “Education is the basis. If you bring up boys in the context of gender neutrality and parity, what you will get is a young man who will respect not just fellow boys but girls.”

UN Women’s Goodwill Ambassador for South Asia, Farhan Akhtar, was equally adamant about the need for major societal changes and the importance of education, particularly of boys. Calling for boys to be taught a redefined version of masculinity, he said they could then hope to evolve into the people society wants its people to be in the modern world.

“Men have an important a role to play in this quest for a world without gender-based violence and discrimination as women do,” he said. “Laws and justice can accomplish a great deal but society has to change because it is society that breaks the laws.”

“A country that does not respect its women in peacetime will not prevent them in conflict,” she said, stressing that sexual violence does not occur accidentally in conflict situations. “It is planned and deliberate,” she stressed, adding that state militaries and police forces were often part of it.

“The lower the status of women in society – the less education, the lower the economic opportunities – the more vulnerable they are to sexual violence when conflict breaks out,” she added, calling for a change to the system to ensure better protection of women and prosecution of violators. “Very little money is put aside to deal with the victims of sexual violence.”

The panellists representing the UN system were also joined by ministers from Cambodia and Australia, who spoke about the practical efforts made in their countries to try to tackle the issue of gender-based violence, describing national action plans and the methodologies employed to see them through, and by civil society representative Arunadha Kapoor, who noted how much more willing women were today to discuss violence perpetrated against them. 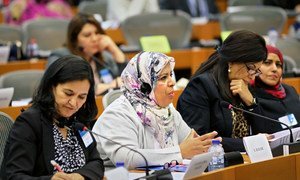 ‘Women in Politics’ 2015 Map launched at United Nations headquarters today reveals the “snail’s pace of progress” on gender equality and women’s participation in public and political life, prompting representatives of the UN and the Inter-parliamentary Union (IPU) to warn that such slow advancement will severely check the new global development agenda due to be adopted later this year.