UN Women/Emad Karim
Female politicians at a meeting of women lawmakers from Arab States and members of the European Parliament in November 2014 in Brussels, Belgium.
10 March 2015

‘Women in Politics’ 2015 Map launched at United Nations headquarters today reveals the “snail’s pace of progress” on gender equality and women’s participation in public and political life, prompting representatives of the UN and the Inter-parliamentary Union (IPU) to warn that such slow advancement will severely check the new global development agenda due to be adopted later this year.

“If today’s leaders front-load gender equality, if they start now to make good on those 20-year-old promises, we can look forward to gender equality by 2030 at the latest,” said Executive Director of UN Women Phumzile Mlambo-Ngcuka as she called for renewed commitments and investments to meet the Beijing Platform for Action’s target of gender balance set back in 1995.

UN Women, created in 2010 under the leadership of the UN Secretary-General Ban Ki-moon, together with the Inter Parliamentary Union (IPU) today jointly launched this year’s Women in Politics: 2015 Map at United Nations headquarters in both Geneva and in New York.

The Map’s findings presented a mixed picture gleaned from data and global rankings for women in politics showed more countries than ever before (48) have 30 per cent or more women members in at least one parliamentary chamber, up from 46 in 2014 and 42 in 2013.

“The global average for women MPs also reached its highest ever level to above 22 percent,” UN Women and IPU said in a joint press release. “However, that growth was a disappointing 0.3 percentage points and followed the record level of increase (1.5 points) during 2013, suggesting that the impact of quotas was wearing off.”

According to the Map, the Americas maintains its lead as the region with the highest average of women MPs at 26.4 per cent with Bolivia the highest placed country from the region ranking No.2 in the world with 53.1 per cent.

In contrast, the Pacific remains the region with the lowest average of women MPs.

The number of women Heads of State and/or Government in the world regained a previous peak of 19, it said, and women account for 15.8 per cent of all Speakers of Parliament, an increase of one full percentage point during 2014.

Thirty countries currently have 30 percent or more women ministers with Finland, Cabo Verde, Sweden, France and Liechtenstein occupying the top five places. Although this figure has dropped from 36 countries in 2014, there are now only eight countries with no women in government: Bosnia Herzegovina, Brunei, Hungary, Pakistan, Saudi Arabia, Slovakia, Tonga and Vanuatu.

The countries that saw the largest decreases between 2014 and 2015 were Peru, Malawi, Denmark, Belgium and Paraguay, with losses ranging from two to six women ministers.

“The snail’s pace of progress on gender equality and women’s participation in public and political life will need to be tackled head-on” for the overall success of the new sustainable development agenda taking over from the Millennium Development Goals this year,” according to the joint UN Women-IPU press release. 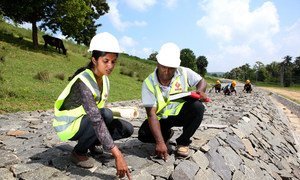 Twenty years since the world signed on to the 1995 Beijing Declaration and Platform of Action – a blueprint for gender equality – women of the world are still subject to sexual violence and lag behind men in an array of critical aspects of life, like health, education, wages, property ownership and political participation. Yet some gains have made, albeit slow and uneven, the UN says.