Hosting the event to launch the report ">Saving Lives, Protecting Futures alongside Amina Mohammed, the Special Advisor on post-2015 development planning, in the Economic and Social Council, Mr. Ban noted that the Every Woman Every Child health partnership was the fastest growing in history.

“This young, dynamic partnership has already developed real momentum,” he said. “Because of our collective endeavour, more women and children are surviving than ever before. Since 2010 alone, the world has saved the lives of some 2.4 million women and children.”

Mr. Ban said the issue of maternal and child health was a “personal cause” to him because of his experiences losing a sibling and his travels, which he said had exposed him to “needless suffering” around the world.

Under the partnership, remarkable progress had been made in the 49 countries targeted, on preventing mother-to-child HIV transmission, and of increasing availability of oral rehydration therapy for treating infant diarrhoea, of exclusive breastfeeding and of post-natal care for women. Other achievements include greater availability of professional maternity care, family planning, childhood vaccinations, and prenatal care.

Progress was made possible by an unprecedented level of resources mobilized for women and children's health with close to $60 billion committed by the partners of the global movement, nearly two-thirds of which has already been disbursed. A research and development pipeline containing more than 1,000 new innovations for maternal and child health and representing $225 million in investments has also emerged since 2010.

'Every Woman Every Child' garnered over 400 commitments by more than 300 partners around the world, ranging from governments and foundations to business, civil society and low-income countries themselves. The variety of partners that came together for the partnership is one of the most salient achievements of 'Every Woman Every Child.'

The movement has helped strengthen high-level political commitment, mobilize resources, focus attention, consolidate efforts and bring people together to produce global results. According to the report, the movement demonstrated the value of an agreed accountability framework against which all commitments have been measured. It showed the power of innovation to develop and implement new solutions.

Looking forward, the Report calls for building on the momentum of the last five years as part of the new development agenda to eradicate maternal and under-five deaths, which are generally preventable using strategies and health tools that are known, simple and affordable.

It called for accelerated progress in scaling up childhood vaccinations and care for pneumonia, as well as strengthening health care systems and improving universal access to care, a problem highlighted during the recent Ebola experience, in which women and children bore the brunt of poor access to trained health workers and facilities.

Ms. Mohammed, opening the event, said that while the event offered a chance to celebrate collective success, delegates also had to leave the event with momentum behind them to tackle unfinished business, notably Millennium Development Goals four, five and six.

“As we look ahead to the next development agenda, we know that it will require us to raise our level of ambition and scale and this will demand that all sectors play their part, especially in partnerships,” she said. “Let's celebrate today's success and use the lessons learned to be even more ambitious over the next 15 years.” 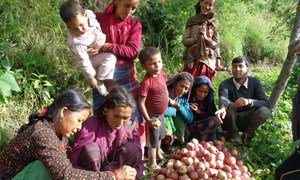