Four years of armed conflict, economic disintegration and social fragmentation in Syria have hollowed out its population by 15 percent, forced some 10 million people to flee their homes and reduced life expectancy by two decades – from nearly 76 years of age to 56 – according to a United Nations-backed report released today on the “catastrophic” impact of the conflict.

“While crushing the aspirations of the Syrian people and their ability to build and form institutions that can restore human security and respect human dignity and rights, the armed conflict has depleted the capital and wealth of the country,” according to the Syria: Alienation and Violence, Impact of the Syria Crisis Report, produced by the Syrian Centre for Policy Research with the support of the UN Development Programme (UNDP) and the UN Relief and Works Agency for Palestine refugees in the Near East (UNRWA).

“Measured in terms of human development capacity and choices, the [Human Development Index] HDI value of Syria degraded by 32.6 per cent since 2010, falling from just below a middle ranking position to 173rd position of 187 countries,” it said.

Syria has become a country of poor people, with an estimated 4 in every 5 Syrians now living in poverty – 30 percent of the population having descended into abject poverty, according to the report.

The report details the tragic context facing all people in Syria, including the lives of Palestine refugees that have not been spared the trauma, UNRWA says, noting that the agency delivers humanitarian aid to 460,000 refugees who are wholly dependent on it to help them meet minimum daily needs.

During the last four years, more than 10 million Syrians have been forced to flee their homes and neighbourhoods because of violence, fear, intimidation and homelessness.

“The population of Syria was hollowed out by 15 percent as 3.33 million Syrians fled as refugees to other countries, together with a 1.55 million persons who migrated to find work and a safer life elsewhere,” the report explained. “Within the remaining population of Syria, some 6.80 million people had been internally displaced.”

The report drew attention to “the appalling loss of life,” as the death toll increased in the past year reached 210,000 persons. And together with the 840,000 people who were wounded, 6 per cent of the population were killed, maimed or wounded during the conflict, it said.

“Equally horrendous is the silent disaster that has reduced life expectancy at birth from 75.9 years in 2010 to an estimated 55.7 years at the end of 2014, reducing longevity and life expectancy by 27 per cent,” the report noted.

In the midst of this social disintegration and economic degradation, the education, health and social welfare systems are in a state of collapse.

The report said that education is in a state of collapse with half of all school-age children no longer attending school, with almost half of all children already losing three years of schooling.

The report concluded that “the people of Syria are now forced to live under a terrible state of exception, estrangement and alienation with a massive social, political and economic chasm dividing them from those involved in violence and the institutions of violence.”

And humanitarian interventions are unable to keep pace with the rapidly escalating needs of the poor and displaced, who are increasing exposed to insecurity and sectarian violence.

The report said its aim is to estimate, document and analyze the catastrophic socioeconomic impact of the ongoing armed conflict, and highlight some of the pitfalls and gaps in applying mainstream analytical framework due to the complexity and specificity of Syrian crisis. 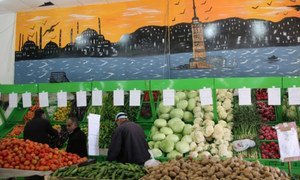 The United Nations World Food Programme (WFP) today said “a critical shortage of funding” has forced it to reduce the number of Syrian refugees it can assist through an innovative electronic voucher system in Turkey, which hosts the largest number of asylum-seekers fleeing fighting in neighbouring Syria.