Condemning the “reprehensible” attacks on civilians and United Nations peacekeepers and facilities in Mali, UN independent expert Suliman Baldo today expressed deep concern that massive violations of the most basic rights continue to plague populations in areas affected by fighting.

In a press release at the end of is his fourth visit to the country – from 1 to 10 March and including stops in Gao and Kidal – Mr. Baldo, Independent Expert on the situation of human rights in Mali, noted the fragility of the cessation of hostility agreement signed in Algiers on February 19, and explained “the tensions created by the current situation of neither war nor peace has encouraged those who are not interested in peace to sabotage the ongoing efforts.”

Against this backdrop, he said the recent terrorist attacks had led to five civilian deaths in the capital, Bamako, and to the attack against a barracks belonging to the UN Multidimensional Integrated Stabilization Mission (MINUSMA) in Kidal that killed two Malian children and a Chadian peacekeeper, and injured 11 peacekeepers and three civilians.

“These attacks against civilians and MINUSMA facilities are reprehensible and the perpetrators must be identified and brought to justice,” declared Mr. Baldo.

The parties involved in the conflict in northern Mali continue to regularly violate the cessation of hostility agreements signed in Kidal and Algiers to strengthen and expand their areas of control, as well as to strengthen their positions in the Algiers peace process, the expert observed.

“The extremist or terrorist armed groups that are not signatories of these agreements, have an obvious interest in sabotaging any process that could lead to the return of peace and stability in Mali,” he added.

“Given the complexity of this conflict whose multiple dimensions [extend] beyond the borders of Mali, national stakeholders, namely, the Government of Mali, the Movements of the Platform and Coordination will have to show good faith and confidence…and work together to conclude the lasting peace [the people of the country are awaiting],” Mr. Baldo said.

He went on to reiterate the need to place victims at the centre of the peace and reconciliation process and to facilitate women's participation therein. “The precarious security situation in northern Mali has a very negative impact on the enjoyment and protection of all human rights, including civil, political, social, cultural and economic,” he explained.

The expert also underscored that in wide swathes of Mali’s restive north, from which civil authorities withdrew in May 2014, the public feels “a sense of almost total abandonment.” The independent expert was also deeply concerned that the situation in northern Mali had deteriorated significantly since his last visit.

“In the absence of magistrates and other officers of the criminal justice system, a climate of impunity has settled into the north.” Moreover, the risk for humanitarian actors working in the northern regions is very high due to frequent armed attacks and banditry directed against them. “These attacks and the frequent use of mines and improvised explosive devices by terrorists on roads, continue to exacerbate the humanitarian crisis and impede civil movements,” he added.

Also condemning ongoing attacks against UN peacekeepers, Mr. Baldo said that the final report of the high-level team appointed by Secretary General Ban Ki-moon to investigate these events will be presented by the end of March 2015. “I do not want to prejudge the outcome of this investigation, but I would like to emphasize that peacekeepers are held to the highest standards. Those responsible will be held accountable.” 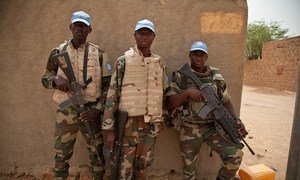 The United Nations today condemned in the strongest terms the attack in Mali that killed two Malian children and a Chadian peacekeeper with the UN Mission in the country (MINUSMA) and injured 11 peacekeepers and three civilians.