IFAD/Shiva Adhikari
Women in Nepal learn how to grade apples for sale.
9 March 2015

“Women continue to suffer disproportionately from the economic crisis, from the impacts of climate change, from the displacement caused by conflict, persecution and so much else,” Mr. Ban said in his remarks at the 59th session of the Commission on the Status of Women (CSW) at Headquarters in New York this morning.

For the next two weeks, UN Member States, civil society organizations and UN entities will deliberate the implementation of the 1995 Beijing Declaration and Platform for Action. This year's session is particularly significant as it marks the 20th anniversary of that meeting which gave birth to the action plan that has become widely known as the blueprint for women's empowerment, and focuses on 12 critical areas of concern, from women and the environment to ending violence against women.

“We must build on the Beijing foundation and complete our work,” said the UN chief, who was joined by high-level speakers including President of the General Assembly, Sam Kutesa, Executive Director of UN-Women, Phumzile Mlambo-Ngcuka, Vice-President of Economic and Social Council (ECOSOC), Oh Joon, as well the Administrator of UN Development Programme (UNDP), Helen Clark.

Delivering a statement in her country's capacity as this months' Security Council President was Ms. Pascale Boistard, France's Secretary of State for Women's Rights. Speaking on behalf of civil society was Lydia Alpízar, Executive-Director of the Association for Women's Rights in Development and the Representative of the Voice of Libyan Women and member of UN-Women Global Civil Society Advisory Committee.

The keynote speech was delivered by Patricia Licuanan, Chair of the Commission on Higher Education of the Philippines. A Political Declaration marking the twentieth anniversary of the Fourth World Conference on Women was also unanimously adopted at this opening session.

“Since the Beijing Conference, more girls have attained more access to more education than ever before. Maternal mortality has been almost halved. More women are leading businesses, governments and global organizations,” Mr. Ban said, urging that more can and must be done. “Our goal must be 50:50 by 2030,” the Secretary-General said, urging Governments to work closely with women's groups and organizations, and calling on all men to believe in and work for the empowerment of women.

Taking to the podium next, the President of the General Assembly, Sam Kutesa also called on men and boys to get increasingly involved to help break down gender stereotypes and discriminatory social norms. 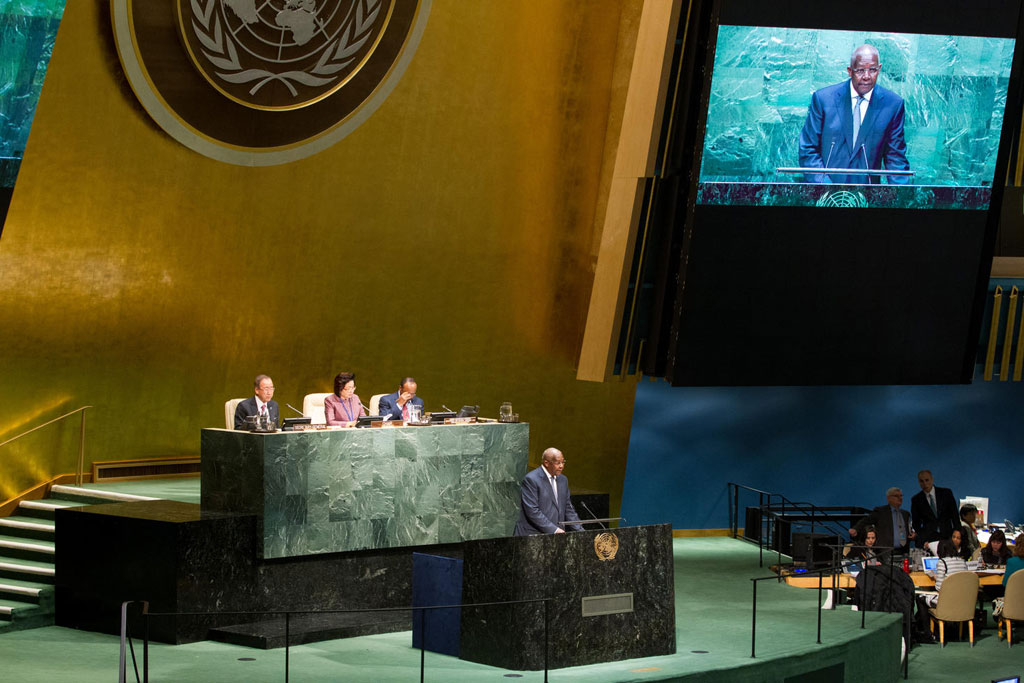 General Assembly President Sam Kutesa addreses opening session of the Commission on the Status of Women.

“We must use the opportunity before us to advance these important discussions, follow-through on our decisions, and take the bold actions necessary to address the remaining issues that inhibit women and girls from realizing their complete potential, and being full and equal contributors to our future development aspirations,” Mr. Kutesa urged.

Many challenges remain, he emphasized, including persistent violence against women and girls, high levels of maternal mortality, discriminatory laws and customs, the unequal distribution of resources, lack of access to affordable credit by women-owned businesses, as well as access to the political spheres. If the world is to embark on a truly transformative and inclusive future development framework, it is essential that everyone gets engaged in the process.

He recalled last Friday's High-level Thematic Debate on Advancing Gender Equality and Empowerment of Women and Girls for a Transformative Post-2015 Development Agenda, during which Member States, civil society and business leaders delivered inspiring messages encouraging the acceleration of the implementation of Beijing and the realization of the gender-specific goals of the Millennium Development Goals (MDGs).

It's important to “feel heartened” by the progress made in girls' enrolment in primary and secondary education, increased participation of women in labour markets, access to reproductive health-care, and increased participation in political life. But in shaping the Post-2015 development agenda, the world must reflect the gaps as well to take concrete measures to integrate gender perspectives in future goals.

UN-Women chief, Phumzile Mlambo-Ngcuka, recalled how 20 years ago, as a part of a cohort of international instruments and declarations, countries pledged to achieve gender equality by 2005. 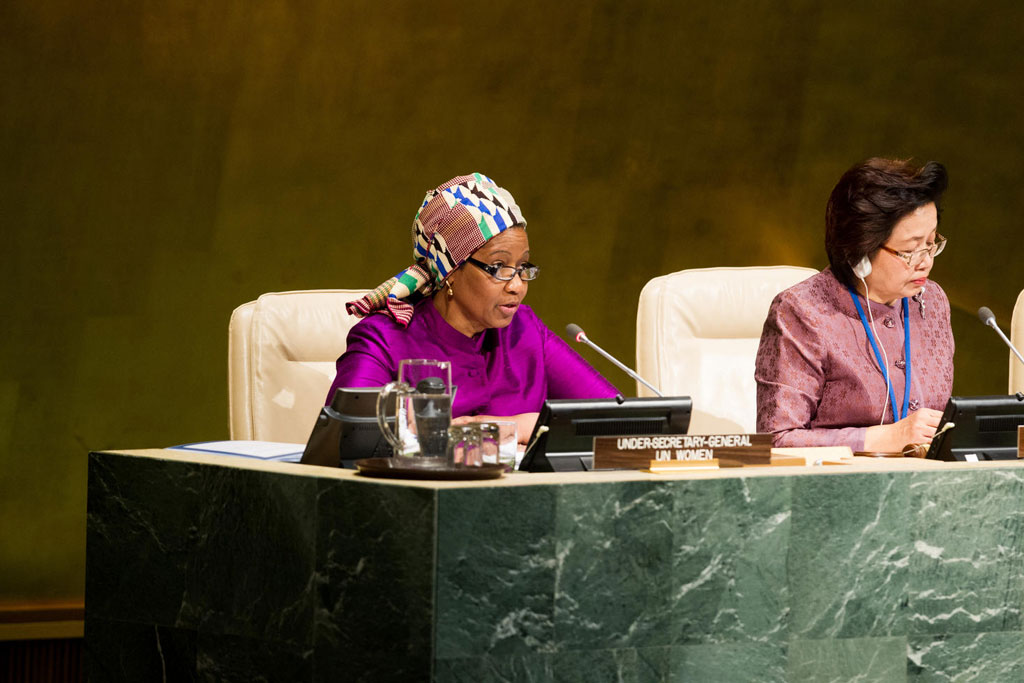 “However, we chose to prioritize the work that has not led to irreversible and deep rooted change,” she said, pointing out that while constitutions may have been amended and new legislature enacted, implementation has been lacking. “We must better address multi-sectoral problems affecting women including wars, the financial and environment crises. We must better serve disabled and marginalized women who are targeted for their sexual orientation,” she emphasized.

Change must take place in the power dynamics between men and women. This is what we need to do now. For the next 15 years, the new development agenda must ensure full coherence and data informed linkages between women's social and economic empowerment.

“We must achieve substantial change within the first five years and equality before 2030. We need urgent action and renewed and much stronger political commitment,” she said, adding men as CEOs, world leaders, fathers and husbands must empower the women in their lives. Men and boys are vital in ending unequal pay, saying no to marrying children, and fighting global epidemic of violence against women. It's important to promote “positive masculinity,” she said.

In inspiring change, quotas can support help in the private sector and can be an important stepping stone to 'planet 50-50.' Civil society deserves more funds to carry out its instrumental role. Moreover, the world must confront the growing extremism that is against women's empowerment and gender equality, she urged, calling it a “new danger.” We must also make elected representatives more accountable to women.

“We are the first generation for whom ending poverty and realizing gender equality are within reach but we need to courage,” she said, urging today's participants to step it up and demonstrate bold action at this gathering in order to see the implementation of Beijing+20 commitments because in 2030 there must be a world of gender equality.

Speaking next, ECOSOC's Vice-President, Oh Joon, called the Commission an “indispensable” member of the Council's system, saying that the Commission has contributed to the Council's work to advance the post-2015 development agenda by integrating different dimensions of gender equality. In 2015, ECOSOC will focus on supporting the transition to the new development framework. 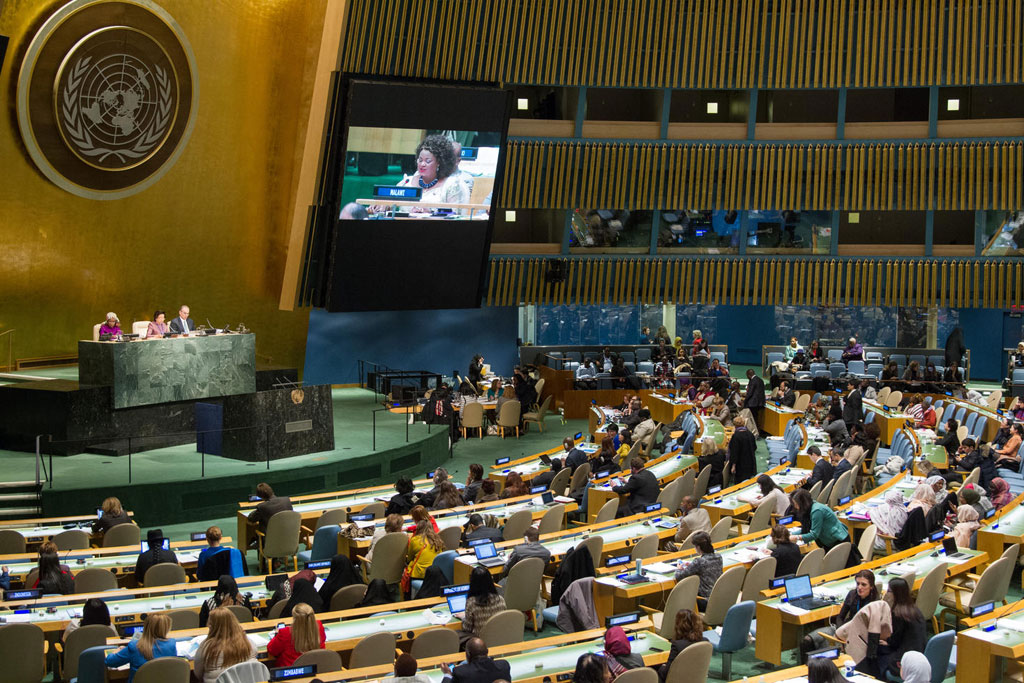 Participants at the opening session of the Commission on the Status of Women.

“We believe that the CSW will greatly contribute to the transition by aligning its focus to this year's ECOSOC theme and providing substantive input from the perspective of gender equality and empowerment of women,” he said.

The ECOSOC system working as a unifying platform will be key to setting a transformative and universal post-2015 agenda, and to strengthening linkages. “I believe that our common efforts will help mobilizing the whole UN system to mainstream gender issues in the deliberations of a new development agenda and beyond,” Mr. Oh said.

Taking to the floor next, Pascale Boistard, speaking in her country's capacity as President of the Security Council, highlighted the role of the 15-member today in promoting gender equality and women's empowerment. She recalled how 15 years ago the Council adopted a resolution on women in conflict in hopes of moving forward gender equality, women's role in dispute resolution and raising awareness of sexual violence as a tactic of war.

The development of the women peace security agenda has made specific advancements, she said. For example, last year, the UN designated the first woman general commander at its mission in Cyrus, known as UNFICYP, which is now the first operation in the world led by a female-duo.

“What does this signify on the ground and how does it affect the lives of women who are involved in peacekeeping missions?” she asked. Measuring the real impact on the ground of these decisions is a major undertaking but data remains insufficient. There are millions that are excluded from decision-making and conflict resolution processes. 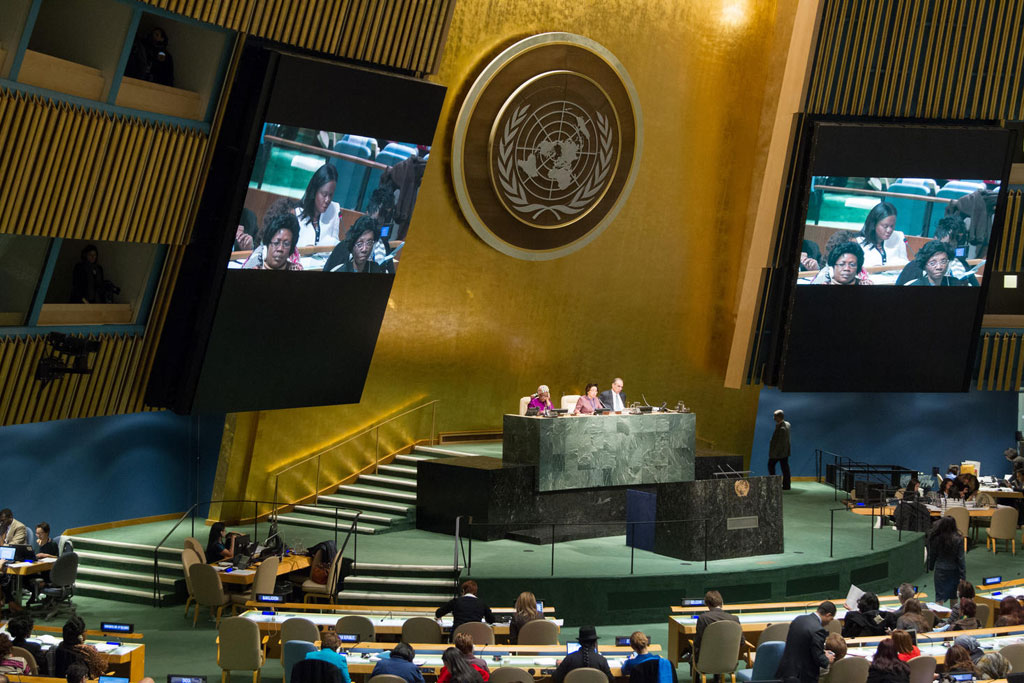 Participants at the opening session of the Commission on the Status of Women.

The Council, among other UN bodies, must intensify the common goal to advance women. Challenges remain enormous, she said, pointing out that only 17 per cent of all heads of peacekeeping missions are women.

UNDP head Helen Clark took to the podium saying that in the last 20 years, UNDP has sought to translate the Beijing Platform for Action into concrete improvements in the lives of women and girls. “We have engaged with governments, women's organisations, and civil society in general to address the needs of women and girls, and to promote women's leadership and participation in all areas of development.”

But much more needs to be done to realize the vision of the Beijing Platform for Action, she urged, calling 2015 is a once-in-a-generation opportunity to ensure that gender is embedded in major global agendas.

“Gender equality and women's empowerment will be crucial to achieving the post-2015 sustainable development agenda and its goals and targets,” Miss Clark said, adding that the worldwide UN survey, MYWorld, has had a huge response from women voting on their priorities for the future.

This 59th Commission on the Status of Women will reflect on achievements in gender equality and women's empowerment since 1995, and on the unfinished business which requires a redoubling of effort globally.

“Our goals must surely be to see that women have full access to sexual and reproductive health services and to all other health services, are full and equal partners in decision-making, and are able to make their own choices about their lives, enjoy equal access to education, and can live in peace in their homes and communities. Let us work for equally shared responsibilities in our homes too,” she said.

Among his activities today on the margins of the Commission's opening session, the Secretary-General met with Ellen Johnson Sirleaf, President of Liberia. He commended President Johnson Sirleaf for her leadership in efforts to defeat Ebola and welcomed the progress made so far. He underscored the need to remain vigilant and pledged the UN's support for Liberia's post-Ebola recovery and development. He also stressed the importance of drawing lessons from the Ebola response to manage future global health crises.

Mr. Ban and President Johnson Sirleaf discussed the draw down of the UN Mission in Liberia (UNMIL) and agreed that it should be carried out in close cooperation with the Government of Liberia. They also discussed the post-2015 development agenda and the need for high-level, global participation at the International Conference on Financing for Development in Addis Ababa later this year.

Thousands of people gathered today in New York to march from United Nations headquarters to Times Square in commemoration of International Women's Day and to demand greater efforts by Governments to achieve gender equality worldwide.