The United Nations today condemned in the strongest terms the attack in Mali that killed two Malian children and a Chadian peacekeeper with the UN Mission in the country (MINUSMA) and injured 11 peacekeepers and three civilians.

Both the Secretary-General and the Security Council expressed their deepest condolences to the families of the victims of this heinous crime, as well as to the Governments and people of Mali and Chad, and to MINUSMA.

“The killing of UN peacekeepers and civilian Malians is intolerable and a breach of international humanitarian law,” said a statement released by the Spokesperson for the Secretary-General about the attack, which took place in Kidal, in the North of Mali. “This flagrant attempt to obstruct progress at a crucial moment in the Malian peace process is reprehensible.”

The Spokesperson's statement added that the Secretary-General encourages all Malians to reject such violence and intimidation and to continue efforts to arrive at a peaceful resolution of the conflict, a sentiment echoed in the press statement agreed by members of the Security Council, who reiterated their support for the Special Representative of the Secretary-General in Mali and MINUSMA to assist the Malian authorities and the Malian people in their efforts to bring lasting peace and stability to their country, as mandated by the Security Council in resolution 2164 (2014).

Also reiterating their full support for MINUSMA and the French forces that support it, Council members urged all parties to refrain from any action, whether direct or conducted through proxies, that jeopardizes prospects for peace and, in that regard, reiterated their readiness to consider appropriate measures, including targeted sanctions, against those who resume hostilities and violate the ceasefire.

They also called on the Government of Mali to swiftly investigate the attack and bring the perpetrators to justice, stressing that those responsible for the attack shall be held accountable, and reaffirming the need combat by all means, in accordance with the Charter of the United Nations, threats to international peace and security caused by terrorist acts.

Any acts of terrorism, the Council reaffirmed, are criminal and unjustifiable, regardless of their motivation, wherever, whenever and by whomsoever committed, and reminded States that they must ensure that measures taken to combat terrorism comply with all obligations under international law, in particular international human rights, refugee and humanitarian law. 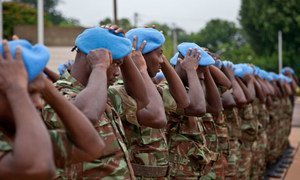 The Secretary-General has strongly condemned the deadly terrorist attack that took place today in Bamako, Mali, today, which resulted in the deaths of five civilians and seven injuries.