UN Women/Anindit Roy-Chowdhury
A young woman from a fishing community in West Bengal in eastern India. She comes from a village that is known for high levels of trafficking of women and girls to other major cities.
8 March 2015

They noted that while much has been achieved since then in areas such as education, healthcare and the economy, many serious gaps remain, stressing that the UN will be in the forefront of efforts to highlight gender equality, holding a number of major events in the next week, including an International Women's Day march from UN Headquarters to New York's Times Square.

In addition, the annual, two-week long session of the Commission on the Status of Women, opens tomorrow, on 9 March, and will bring representatives of UN Member States, civil society groups and UN entities together to take stock of where women stand today.

“We must acknowledge that the gains have been too slow and uneven, and that we must do far more to accelerate progress everywhere,” said UN Secretary-General Ban Ki-Moon.

Mr. Ban said that the Beijing Conference took place amid the conflict in the former Yugoslavia, which had prompted deserved attention to rape and other war crimes there against civilians.

“Two decades later, with girls as young as seven not only targeted but used as weapons by violent extremists, it would be easy to lose heart about he value of international gatherings,” he said, urging the world to come together in response to the targeting of women and girls by violent extremists.

“From Nigeria and Somalia to Iraq and Syria, the bodies women have been transformed into battlegrounds,” he said. “Women have been attacked for trying to exercise their right to education and basic services; they have been raped and turned into sex slaves; they have been given as prizes to fighters, or traded among extremist groups in trafficking networks.”

He said outrage needed to be translated into meaningful action and, as women and girls are often the first targets of attack, their rights had to be at the centre of the global strategy to address the staggering and growing challenge.

Noting also that women living in societies at peace remained targets of domestic abuse, female genital mutilation and other forms of violence that traumatise individuals and damage whole societies.

“Discrimination remains a thick barrier that must be shattered,” Mr. Ban said. “We need to expand opportunities in politics, business and beyond.”

Mr. Ban's call far action was echoed by the Executive Director of UN Women, Phumzile Mlambo-Ngcuka, who said the world remained far away from achieving equality between men and women, boys and girls.

“Not one single country has achieved equality,” she said. “it is even more urgent than ever that we define – and stick to – a time frame [for doing so].”

Not enough changed in the 20 years since Beijing, she said, particularly in least-developed countries.

“In Africa, 70 per cent of crop production depends on women yet women still own only two per cent of the land” she said. “Women need change and humanity needs change. This we can do together; women and girls, men and boys, young and old, rich and poor.”

Pointing out the “overwhelming” benefits that equality can bring, such as economic growth, poverty reduction, health status improvements and increased resilience to environmental and humanitarian crises, she stressed the importance of empowering women to empower humanity.

Joining Mr. Ban and Ms. Mlambo-Ngcuka in calling for change was the UN High Commissioner for Human Rights, Zeid Ra'ad Al Hussein, who called for participation of women in all discussion of strategic responses to extremist violence, discrimination and to deprivation of all kinds.

“States can seize this opportunity to go beyond li[-service and towards gender equality – genuinely challenging and dismantling the power structures and dynamics which perpetuate discrimination against women,” he said. “All of us, together: men, women, boys, girls – we all have to do this to eradicate gender discrimination. Let us make it happen.”

In his message to mark the Day, the President of the Economic and Social Council (ECOSOC), Martin Sajdik (Austria) also highlighted the importance of having the will to see pledges through.

“The Post-2015 Development Agenda can only be realized if we implement our commitments to promoting gender equality,” he said. 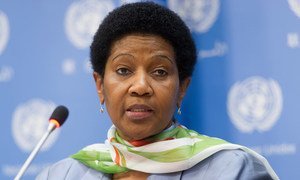 The past 20 years has seen haltering progress on women’s rights issues and, in some areas, outright stagnation and regression, the head of the United Nations entity for gender equality and women’s empowerment said today.