UNSMIL/Iason Athanasiadis
A view of the old town of Benghazi, Libya.
7 March 2015

The United Nations Support Mission in Libya (UNSMIL) has said today that the country's political dialogue is proceeding in a positive atmosphere, with participants agreeing that important progress has been made so far.

“The parties are determined to bridge their differences and have been working on concrete proposals on the key elements regarding security arrangements and a government of national unity to bring peace to the country,” said a press statement released by the Mission today.

The statement noted that those two important issues would form part of a larger agreement on several other important matters, and that the dialogue was conducted in “a spirit of transparency and openness” focused on the greater cause of ending conflict and restoring stability to Libya.

The statement addressed reports circulating on some social media platforms about elements of the discussions regarding the Government of national unity and the security arrangements. It said the specific elements reflected in those reports were partial, preliminary drafts. Other elements, such as relations with the legislature and other State institutions remain matters for discussion.

“They are first drafts. Already these drafts are being elaborated to reflect new discussions,” said the statement. “As in any other discussions, proposals are made and are amended and changed with the consensus of the participants.”

The drafts were produced after lengthy consultations with the parties conducted by the Special Representative of the Secretary-General for Libya, Bernardino Leon, in the past weeks during his frequent visits to Libya and meetings with the key stakeholders.

Participants in the discussions noted the constructive nature of the discussions and the spirit of full engagement in which they took place. Proposals were built on and amended, with language improved and new elements proposed where necessary.

The Mission, which stressed that its role is only to facilitate reaching a peaceful solution to end the bloodshed called, along with the participants in the dialogue, for everyone to protect the process and prevent it from being undermined.

“The discussions are at a delicate phase and require certain conditions to be successful and to be understandable,” the statement read. 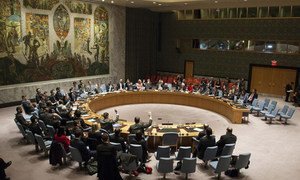 Having determined that the situation in Libya remains a threat to international peace and security and acting under Chapter VII of the Charter, the Security Council adopted unanimously today a resolution extending the mandate of the United Nations Support Mission in Libya (UNSMIL).