The past 20 years has seen haltering progress on women’s rights issues and, in some areas, outright stagnation and regression, the head of the United Nations entity for gender equality and women’s empowerment said today.

Briefing journalists at a press conference at in New York as part of a wider launch of activities tied to International Women’s Day, UN Women Executive Director Phumzile Mlambo-Ngcuka warned that the march towards gender equality had been unacceptably slow amid chronic underinvestment across all areas.

“The Secretary-General’s report makes this very clear,” Ms. Mlambo-Ngcuka said, referring to Secretary-General Ban Ki-moon’s global review of progress on gender equality, slated for full launch on 9 March at the opening of the 59th session of the Commission on the Status of Women.

“The disappointing gap between the norms and implementation of the Beijing Platform for Action points to a collective failure of leadership on progress for women. The leaders entrusted with the power to realize the promises made in Beijing have failed women and girls,” she added.

UN Women noted that the report cites some areas of progress, such as an upturn in the number of countries removing discriminatory laws and adopting legislation to stop violence against women and girls. Meanwhile, girls’ participation in education has led them to being close to half of all students in primary schools while the presence of women in the labour force has also risen.

Nevertheless, despite the 189 countries that endorsed the Platform for Action 20 years ago in Beijing, the Secretary-General’s report notes that no country has yet achieved gender equality. In addition, it points out that despite their better education, women continue to hold some of the worst jobs while the gender pay gap remains a worldwide phenomenon.

Conflict, volatile food and energy prices, fallout from climate change, rising extremism and an insidious backlash against women’s rights due to deeply entrenched discriminatory norms – all continue to restrain advancements for gender parity.

As a result, Ms. Mlambo-Ngcuka continued, UN Women was launching its “Planet 50-50 by 2030: Step It Up for Gender Equality” initiative to galvanize government pledges for action and as part of the wider Beijing+20 campaign.

“Today, we are calling on governments, everywhere in the world, to Step It Up,” she added. “By 2030 at the latest, we want to live in a world where at least half of all parliamentarians, university students, CEOs, civil society leaders and any other category, are women. Real progress requires 50-50.” 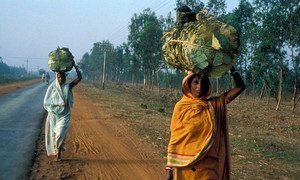 Despite great strides in the advancement of gender parity, women still lag behind men across an array of critical areas, from political representation and wage equality to education – a gender gap that the United Nations is once again tackling head-on as it kicks off its annual observance of International Women’s Day.