IFAD/Dela Sipitey
A woman planting a shea tree in Ghana to protect riverbanks, and for her economic empowerment. Shea butter is eaten or sold for cosmetics.
6 March 2015

Ahead of International Women’s Day, United Nations food relief agencies gathered to remind the world that women farmers play a central role in achieving food and nutrition security, urging countries to step up efforts to empower rural women who too often do “backbreaking work” to harvest food.

“Women are the backbone of rural societies as they grow and process food and make sure their families are well-fed and well-nourished,” said

International Fund for Agricultural Development (IFAD) President Kanayo Nwanze in his opening remarks at an event in Rome, where the UN food-related agencies are headquartered.

“Rural women need more opportunities to participate, improve their skills, gain access to assets, and be involved in agricultural production and marketing. Let us all work together to empower women to achieve food and nutrition security. For their sake and the sake of their families and communities,” he added.

Joining the IFAD President were leaders from the UN Food and Agriculture Organization (FAO) and the UN World Food Programme (WFP) to share their approaches to empowering rural women, promoting gender equality and women’s empowerment in an effort to reduce rural poverty.

This year’s International Women’s Day – celebrated around the world 8 March – also marks the 20th anniversary of the landmark Beijing Platform for Action. However, despite that historic agreement by 189 governments, no country in the world has yet achieved gender equality.

The food agencies highlighted the “feminization of agriculture,” a new trend sparked by the migration of men in developing countries to urban centres. Approximately half of the agricultural workforce worldwide is now made up of women.

“By purchasing crops traditionally cultivated by women, such as beans and soya, WFP demonstrated the key role rural women play as we work together to achieve a world with zero hunger,” Ertharin Cousin, WFP’s Executive Director, said.

“While acknowledging the success of this programme we must scale up the lessons learned to ensure greater opportunities for more women.”

Food security overall would improve significantly if women were empowered with the same opportunities that men have, but it is a complex problem that needs a comprehensive approach, stressed FAO’s Marcela Villarreal.

“While significant progress has been made in improving the lives of women since the Beijing conference, we’re concerned that rural women are lagging behind in every development indicator – both behind rural men and urban women.” 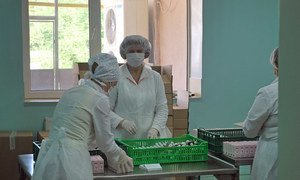 Women earn on average 77 per cent of what men earn, the United Nations labour organization said today, noting that “without targeted action, pay equity between women and men will not be achieved before 2086, or at least 71 years from now.”