Transforming the lives of some 300 million people in the least developed countries in Asia and the Pacific “is not about ticking the boxes on a few variables,” but to ensure that economic growth and development is sustainable to lift the millions above the extreme poverty line, a senior United Nations official in the region said today.

That was among conclusions at the three-day High-Level Asia-Pacific Dialogue on the Implementation of the Istanbul Programme of Action for the Least Developed Countries (LDCs) for the Decade 2011-2020 in Siem Reap, Cambodia.

“Graduation is not about ticking the boxes on a few variables alone to move beyond least developed country status,” said Dr. Shamshad Akhtar, Executive Secretary of the UN Economic and Social Commission for Asia and the Pacific (ESCAP).

“It’s about real transformation of the lives of the 293 million people living in our 12 LDCs, of whom 113 million remain below extreme poverty line, with high exposure to natural disasters, and about the 130 million who have yet to enjoy access to education, health and other basic services,” Ms. Akhtar said.

According to ESCAP, the greatest challenge facing the Asia-Pacific least developed countries is to promote inclusive and sustainable growth and development for reducing poverty and improving the quality of life of the people.

“In these countries, such growth requires measures to accelerate growth with structural transformation, diversifying their economies towards manufacturing and services, along with a focus on increasing agricultural productivity and promoting rural development, strengthening social protection, and enhancing financial inclusion especially of the poor and disadvantaged groups,” ESCAP said.

A clear message from the three-day meeting was that least developed countries, development partners and the UN system must meet the commitments and implement the actions agreed in the Istanbul action plan, including those related to mobilizing financial resources for development and capacity building.

The meeting’s outcome document will be delivered by the Government of Cambodia to ESCAP’s 71st Commission session for its consideration as the basis for the regional mid-term review ahead of the global mid-term review of the programme of action to be held in 2016.

It sets out actions to be undertaken by the least developed countries and their development partners in eight priority areas of action, each supported by concrete deliverables and commitments. These priority areas are: productive capacity; agriculture, food security and rural development; trade; commodities; human and social development; multiple crises and other emerging challenges; mobilizing financial resources for development and capacity-building; and governance at all levels. 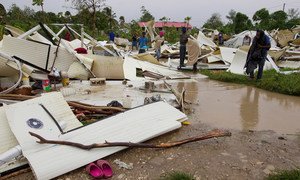 Reducing poverty, improving health and education for all, achieving of sustainable and equitable economic growth and protecting the health of our planet now depend on the management of disaster risks in the day-to-day decisions of governments, companies, investors, civil society organizations, households and individuals, according to a new United Nations report out today.