Despite great strides in the advancement of gender parity, women still lag behind men across an array of critical areas, from political representation and wage equality to education – a gender gap that the United Nations is once again tackling head-on as it kicks off its annual observance of International Women’s Day.

Speaking at the High-Level Thematic Debate on Advancing Gender Equality and Empowerment of Women and Girls for a Transformative Post-2015 Development Agenda this morning, UN Secretary-General Ban Ki-moon admitted that the world had seen “important advances” for gender equity over the past two decades as women’s participation in political life has increased, maternal mortality has dropped, and the gender gap in primary education has closed.

According to UN Women, in fact, approximately 50 per cent of women worldwide are in paid employment – an increase from 40 per cent more than 20 years ago. In the international sphere, meanwhile, the global community has widely acknowledged the need to increase women’s role in peacebuilding in post-conflict countries, boosting women’s presence in area traditionally dominated by men.

Nonetheless, the data also paint a startling picture: today, only one in five parliamentarians is a woman while, at the present rate of progress, it will take an estimated 81 years for women to achieve parity in employment. At the same time, the pandemic of violence against women and girls affects one in three women worldwide. 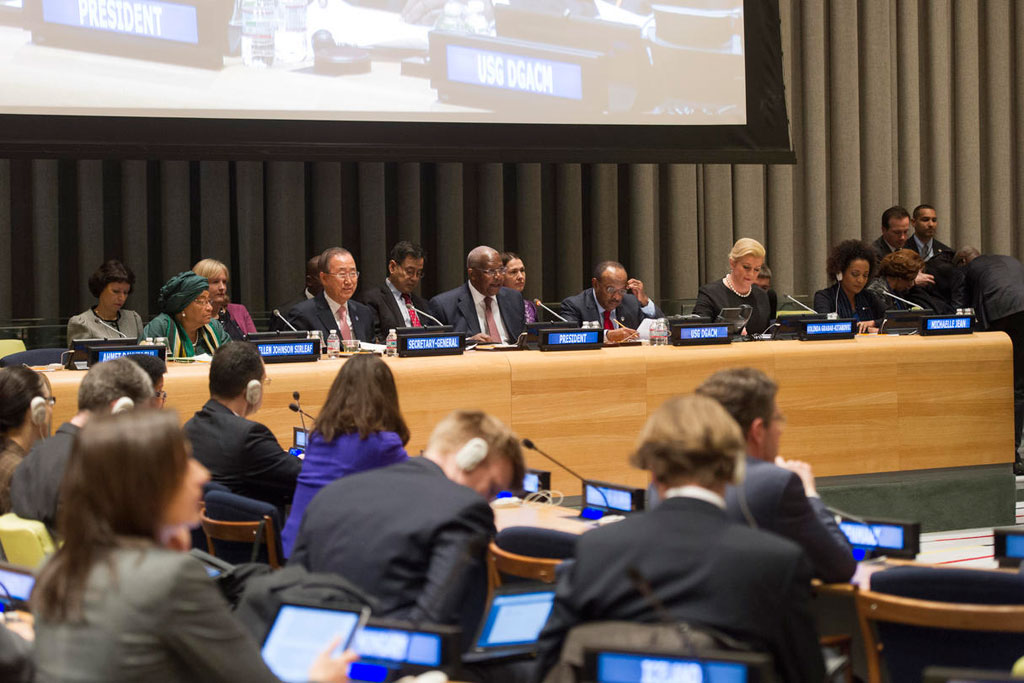 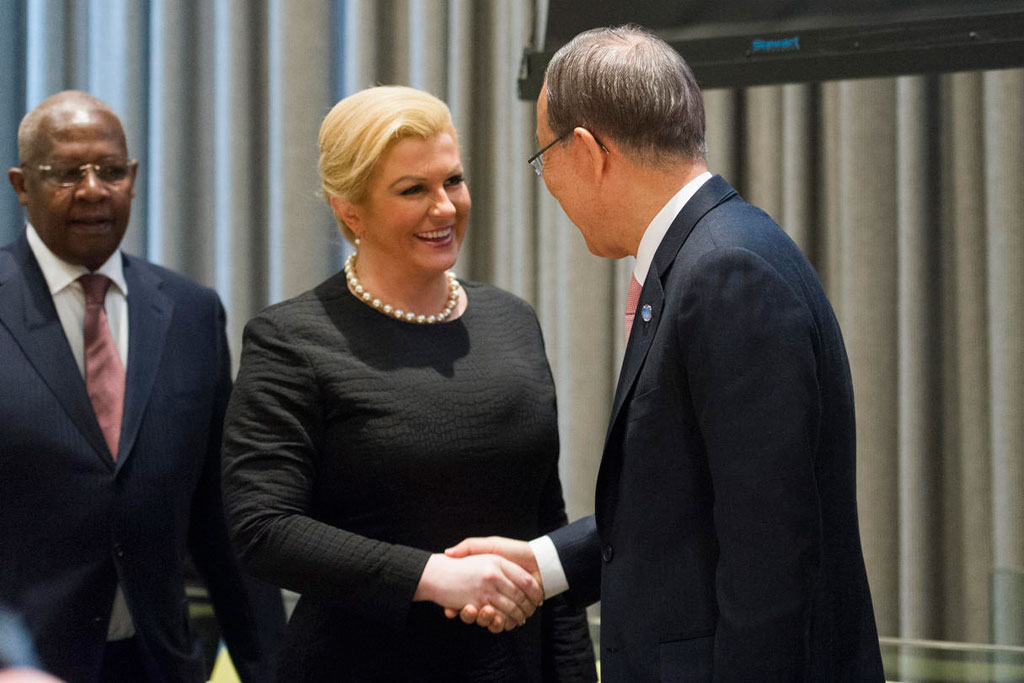 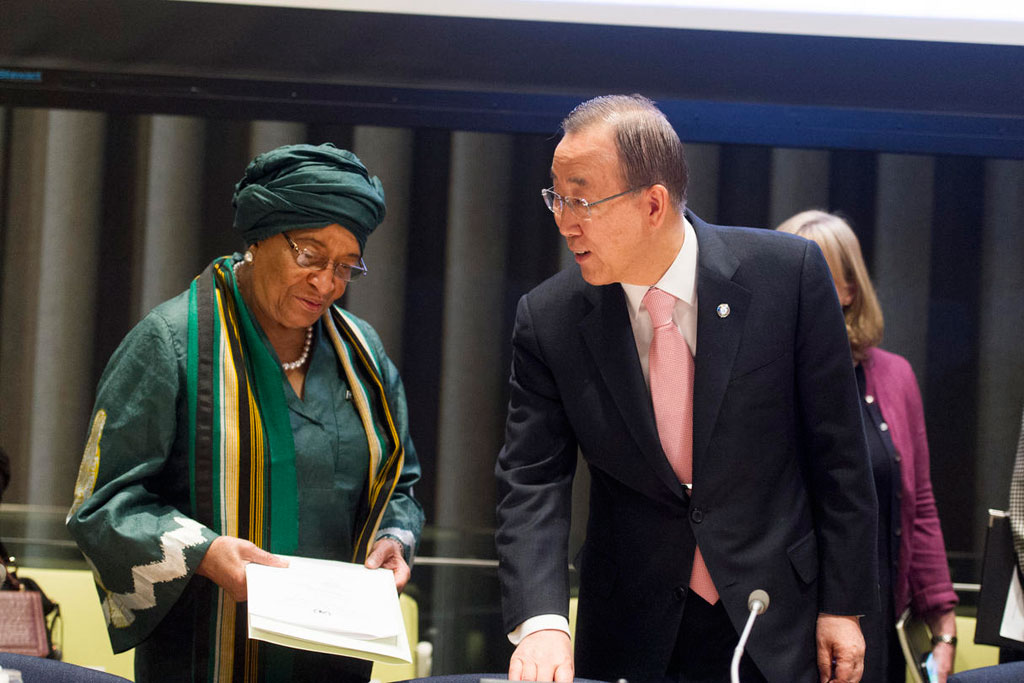 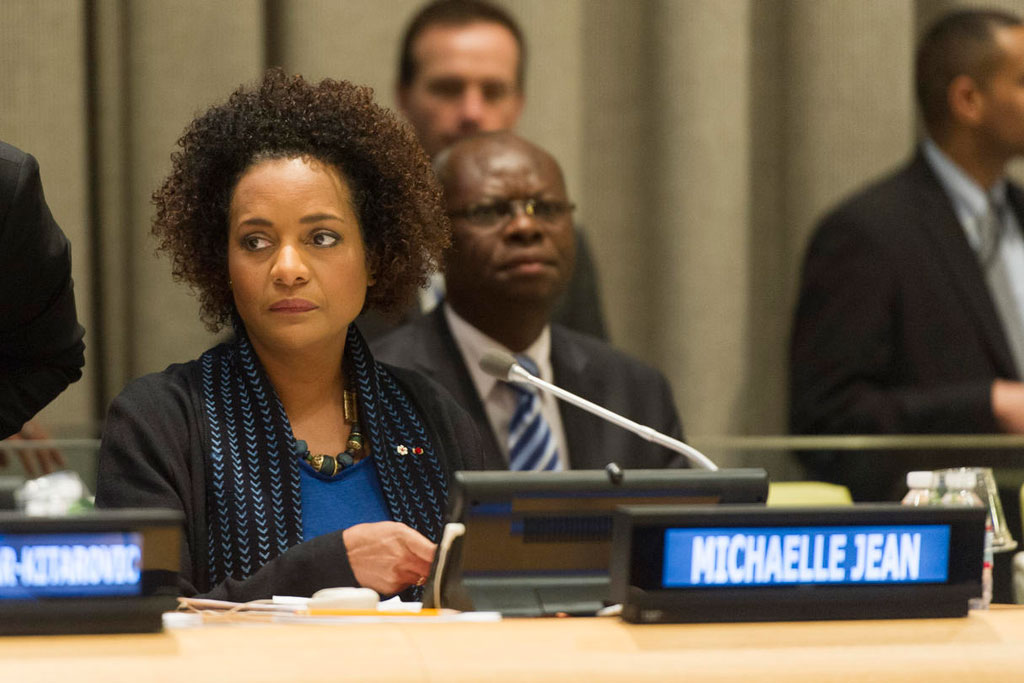 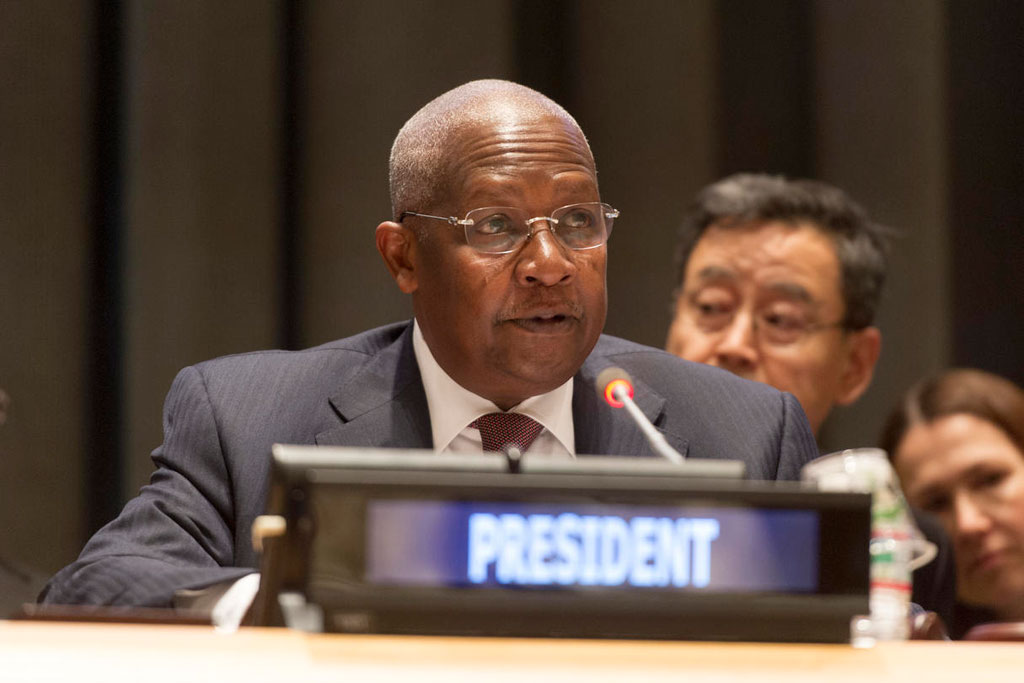 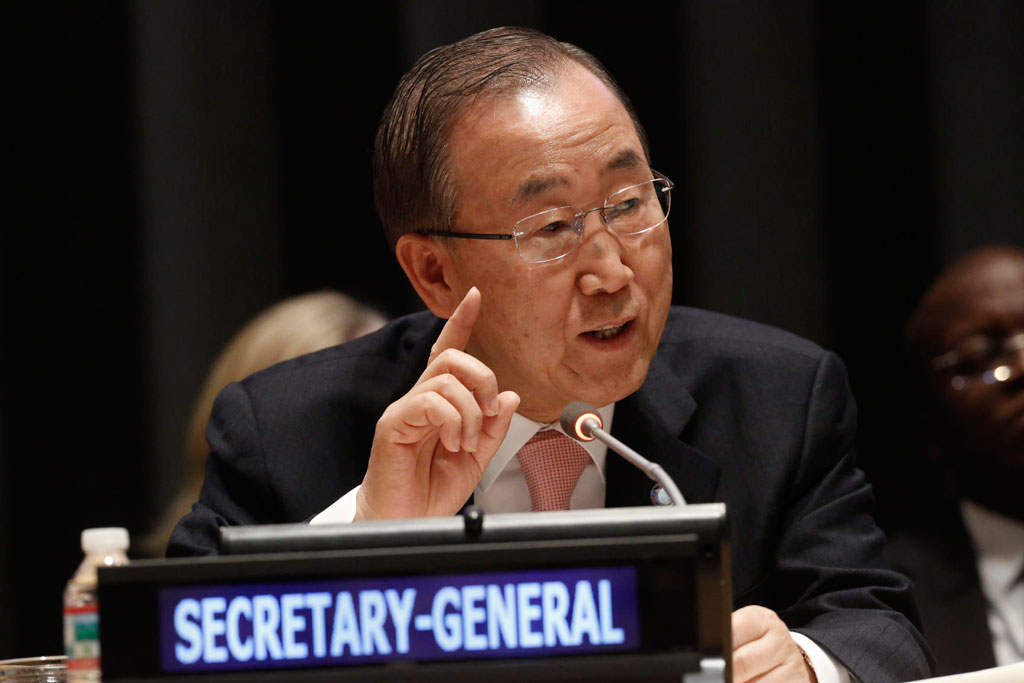 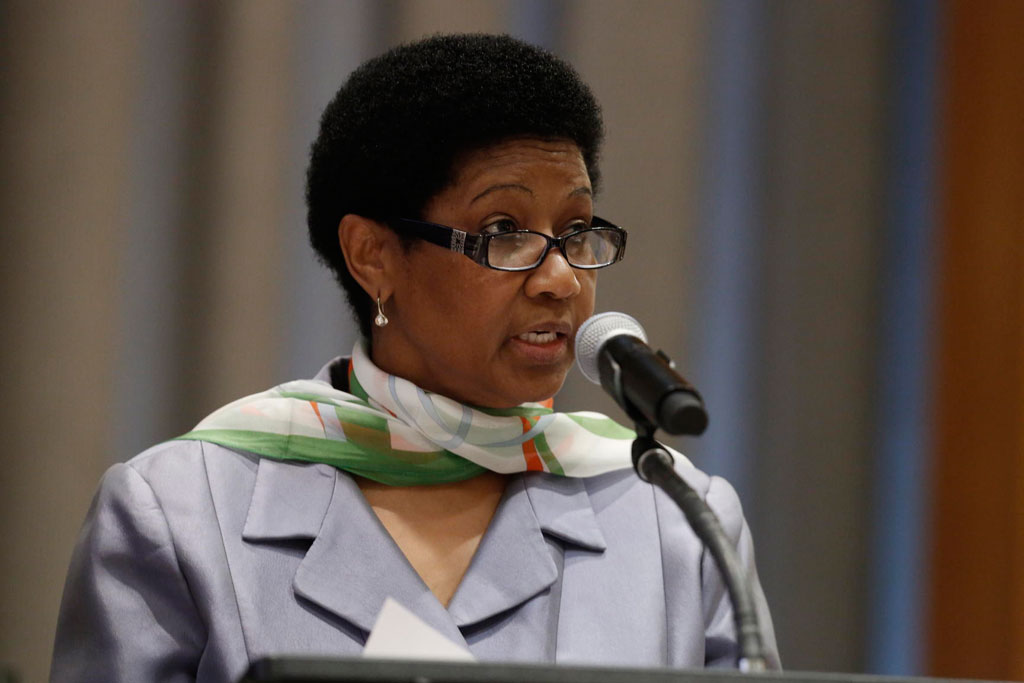 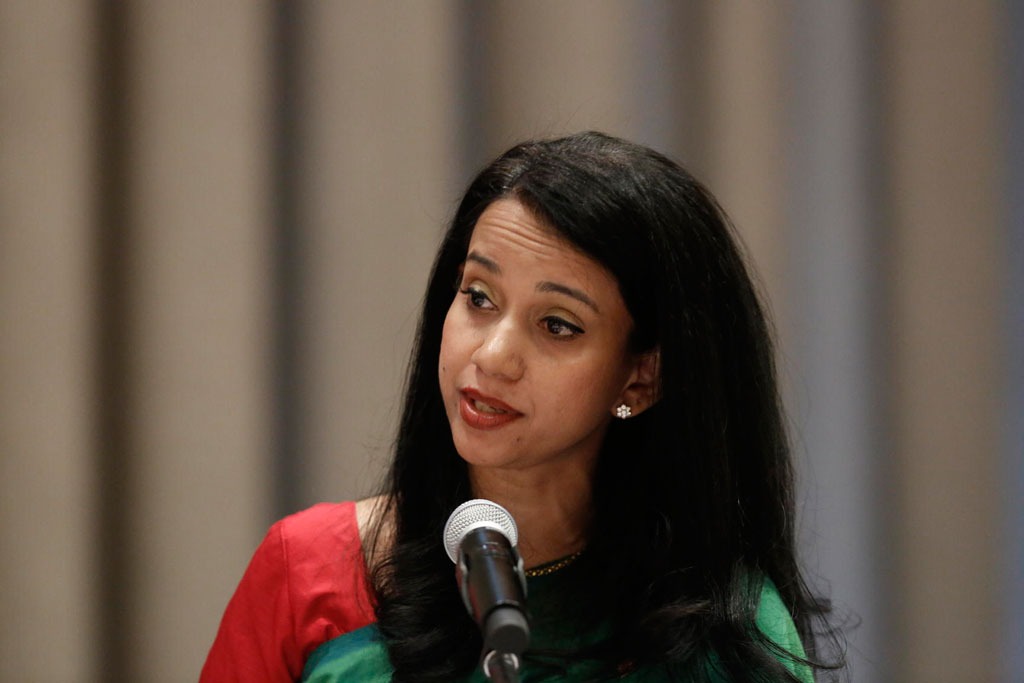 Participants at the High-level Thematic Debate on Advancing Gender Equality and Empowerment of Women in the Post-2015 Development Agenda. UN Photo/Evan Schneider

“The gains have been too slow and too uneven. We must do far more to accelerate progress everywhere,” Mr. Ban said. “We must acknowledge the gaps and chart the way forward.”

The Secretary-General told those gathered that there are still five countries where not a single woman is represented in parliament while eight countries still lack a woman in the cabinet. The scourge of early and forced marriages continues to violate the rights of girls; women still do most of the world’s unpaid and low-paid work; and many women around the world are still denied their sexual and reproductive health rights.

“This year we have a unique opportunity to end these wrongs and deliver on the promises of Beijing,” he continued, referring to the upcoming 20th anniversary of the adoption of the Beijing Platform for Action, the “international blueprint” for gender equality and women’s empowerment.

“Gender equality and the empowerment of women and girls are essential to our sustainable future,” he added.

As the UN prepares for the upcoming 20th anniversary of the Beijing Platform for Action, the Organization will lead the charge on gender issues over the next week through a number of major events, including an International Women’s Day march that will wind its way from UN Headquarters to New York’s Times Square on 8 March.

In addition, the Organization has been generating significant momentum and urgency in the lead-up to next week’s annual session of the Commission on the Status of Women, the two-week event exclusively devoted to the promotion of gender equality and the empowerment of women which will bring representatives of UN Member States, civil society groups and UN entities together to take stock of where women stand today.

Addressing the meeting as a special guest, UN Women Executive Director Phumzile Mlambo-Ngcuka urged governments to adopt a three-pronged approach in order to remove the root causes of gender equality. She said that only with “tireless political will, increased resources, and strong accountability” could the global community formulate a bold enough agenda to pursue gender equality by 2030.

“Governments are the primary duty bearers,” Ms. Mlambo-Ngcuka explained. “Governments must repeal discriminatory laws that inhibit the ability of women to obtain credit, own land, move freely, and take responsibility for their own bodies and health.”

The transformative social changes necessary to push forward gender parity must not exclude the private sector either, she observed, noting that it had “a very significant role to play in investing in the economic empowerment of women.”

Meanwhile, echoing the Secretary-General, Sam Kutesa, the President of the UN General Assembly, similarly warned that the persistent issues of gender inequality needed to be addressed through “frank conversations” and “bold decisions” for the international community to successfully reach the future sustainable development goals.

“There is no shortage of evidence that when we support the fundamental freedoms of women and girls, they are able to realize their full potential to engage in, contribute to and benefit from sustainable development,” he continued. “In doing so, we will all reap the benefits; in our homes, throughout our communities, and across our nations.”

In a wide-ranging keynote address, Michaëlle Jean, Secretary-General of La Francophonie and former Governor General of Canada, stressed that gender equality and women’s empowerment, including in the economic sphere, access to quality education and training, enhanced participation in decision-making and complete access to sexual and reproductive health services, are not only the business of women.

“All this must be a matter for women and men and requires an early awareness of young minds, because these are the prerequisites for a sustainable economic and social situation, to the entrenchment of democracy and the rule of law, as well as peace,” she said, adding: “These are, above all, fundamental and inalienable human rights.”

It is through this prism that the world must, 20 years later, look at the record of the implementation of the Beijing Declaration and Platform for Action. “It is through this prism that we must understand the post-2015 development agenda,” Ms. Jean said, noting that indeed, through the Millennium Development Goal (MDG) process, there has been progress in achieving targets in the areas of girls' education, access to employment and parliamentary representation.

“But are we entitled to congratulate ourselves as millions of women and girls are still excluded?” she asked, noting that normative advances and “declarations and resolution we adopt year after year,” are nothing without implementation, “if the principles and laws made thereunder are not applied and if the support structures needed to achieve them are not created.”

Much more needs to be done. At a time when new steps are being taken, “we urgently need to move forward, Ms. Jean declared, emphasizing: “So do not give in to those who would, in the name of custom, culture, religion undermine the hard-won rights and principles…do not give to those who question the universality of values and principles that honour human family.”

It is that spirit, and with the tenets of the Universal Declaration of Human Rights squarely at the fore, she said the international community must find, preserve, revitalize and relentlessly pursue efforts to recognize in practice, equality between women and men, as well as a recognition of the specific rights of women. “The goal is ambitious, but it is achievable!”

In his concluding remarks, Assembly President Kutesa highlighted some of the key messages delegations had expressed during the event, including, among others, the critical importance of gender equality and the empowerment of women and girls in attaining sustainable development. Indeed, the proposed sustainable development goals were described as an ‘ideal opportunity” to accelerate efforts to empower women and girls.’

“However, beyond a stand-alone goal, many emphasized the need to integrate the gender perspective as a crosscutting issue in all dimensions of the new development agenda,” he continued, adding that the value of education, including lifelong learning opportunities and vocational training for women, was also emphasized.

“Girls must have access to education and be encouraged to study, including in non-traditional areas, such as science and technology, as one of the ways to ‘shatter the glass ceiling,’” Mr. Kutesa said, adding that the international community must also tackle the challenge of violent attacks against girls accessing education to ensure they are able to study, free from fear.

Along with such issues as the tenuous situation of women, girls and children in conflict areas, the need to protect sexual and reproductive healthcare rights, and the importance of addressing the structural causes of gender inequality such as discriminatory laws and practices, social norms, customs, and unequal access to, he said that speakers went on to note the unique and cumbersome hurdles faced by poor, less-educated and otherwise marginalized women.

“The challenges of women in rural settings were highlighted as being especially formidable by many participants, who noted that the time-consuming nature of acquiring basic household necessities often means that rural women are further hindered from participating in political and economic life,” added Mr. Kutesa, informing delegations that in due course, he would transmit a President’s Summary containing the key messages and proposals made for advancing gender equality and empowerment of women to Member States and stakeholders.

The world must unite to end violence and discrimination against women and girls, United Nations Secretary-General Ban Ki-moon urged at a high-level event in Chile on women and decision-making at a today, citing that progress over the past two decades has been made slow and uneven.