UN Photo/Jean-Marc Ferré
High Commissioner for Human Rights Zeid Ra’ad Al Hussein, presents to the Human Rights Council his report on the work of his Office during 2014.
5 March 2015

The world may be at a “turning point” as violent extremism and intolerance remain pervasive across the spectrum of global society, the United Nations High Commissioner for Human Rights said today as he urged Member States to uphold the human rights principles underlying their communities in their fight against radicalism.

Speaking to the 47-member UN Human Rights Council earlier today, UN High Commissioner for Human Rights, Zeid Ra'ad Al Hussein warned of the “real danger” that opinion-leaders and decision-makers would “lose their grasp” of the values that States built 70 years ago “to ward off the horror of war.”

“The fight against terror is a struggle to uphold the values of democracy and human rights – not undermine them,” Mr. Zeid declared. “Counter-terrorist operations that are non-specific, disproportionate, brutal and inadequately supervised violate the very norms that we seek to defend. They also risk handing the terrorists a propaganda tool – thus making our societies neither free nor safe.”

At the same time, the UN human rights chief said he was “appalled” by the “rising tide of attacks” around the world targeting people on account of their beliefs. Such “horrific acts of racial and religious hatred,” he said, spanned countries in Western Europe and North America, where “unfair policing, daily insults, and exclusion” affected large swathes of the population. Meanwhile, he added, “the tentacles of the extremist takfiri movement” – an ideology where one believer apostasies another and then condemns them as impure – had reached into a wide range of countries, from Iraq and Syria to Nigeria, Yemen, Libya and Somalia.

Against that backdrop, Mr. Zeid voiced deep concern at the tendency of States to clamp down on the most basic of human rights, including the adoption of measures that restrict freedom of expression and democratic space.

“When powerful leaders feel threatened by a tweet, a blog, or a high-school student's speech, this speaks of profound underlying weakness,” he continued. “And when writers are abducted, jailed, whipped, or put to death; when journalists are assaulted, subjected to sexual violence, tortured and killed; when peaceful protestors are gunned down by thugs; when human rights lawyers, human rights defenders and land activists are arrested and jailed on spurious charges of sedition; when newspapers are attacked or shut down – such cases attack and undermine the foundations of stable governance.”

“It is the people who sustain government, create prosperity, heal and educate others and pay for governmental and other services with their labour,” Mr. Zeid concluded. “It is their struggles that have created and sustain States. Governments exist to serve the people – not the other way round.” 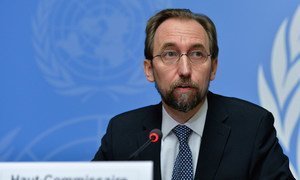