The overall situation in Libya is “deteriorating rapidly” amid a growing terrorist threat and continuing violence, the United Nations envoy to the country warned the Security Council today, as he urged national stakeholders to move firmly in defining the country’s future.

“Libya can no longer afford to allow the political crisis and armed conflict that has gripped the country for much of the past year to fester,” Bernardino León, the Secretary-General’s Special Representative and head of the UN Support Mission in Libya (UNSMIL) said in a briefing to the Council earlier this morning.

“Unless Libya’s leaders act quickly and decisively, the risk to their country’s national unity and territorial integrity are real and imminent,” he added.

Mr. León’s remarks follow a series of recent political and security developments, particularly the deadly terrorist bombings in the city of Al-Qubbah and the decision of the House of Representatives in Libya to resume its participation in the political dialogue. The latest wave of violence has further rattled the war-weary nation, in conflict since the beginning of its civil war in 2011, which resulted in the ouster of late Libyan leader Muammar Gaddafi.

The attack in Al-Qubbah killed at least 45 people and injured scores of others when one bomber detonated his vehicle near a gas station on 20 February. The initial bombing was immediately followed by two car explosions near the home of Libya's Speaker of the House of Representatives and the Government's security headquarters.

Speaking to the 15-member Council by video link from Rome, Mr. León described the Al-Qubbah bombings as a “blatant attempt” to derail the ongoing dialogue aimed at bringing Libyan stakeholders together to build a government of national unity and forge consensus on a peaceful solution for the country.

“The sense of fear and concern in Libya regarding the threat of terrorists is very palpable,” he continued. “Libyan stakeholders have expressed grave concern about the danger that terrorism poses to Libya’s security and stability and of the very limited capacities of the Libyan state to effectively confront this challenge.”

The envoy affirmed that it remained “crucial” for the international community and the UN to address Libya’s terrorism threat. Nevertheless, he added, the country’s political leadership must take “all necessary measures” to prevent further attacks and ensure that all forces operating under its command complied with the political commitment to dialogue.

Against that backdrop, a new round of United Nations-facilitated talks aimed at resolving Libya’s political crisis will kick-off later this week as stakeholders from the North African country prepare to gather in Morocco.

UNSMIL has noted that the parties have agreed to the UN proposal for the upcoming round of talks and are prepared to focus on addressing the formation of a government of national unity, including the discussion about the future prime minister and deputy prime ministers.

“As difficult as the past few years may have been for their country, the Libyan people have not given up on their hopes and aspirations for a modern Libyan democratic state based on the rule of law and respect for human rights,” Mr. León concluded. 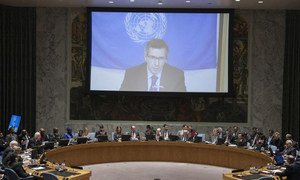 Recent savage terrorist acts – culminating in the beheading of 21 Coptic Christians – highlight the “imminent danger” confronting Libya, its people and the wider region, the United Nations envoy to the country warned today, urging swift agreement among the main parties on resolving the crisis and ending the military and political conflict.