UNDP Bangladesh/Nasif Ahmed
In Bangladesh, an innovative “disaster resilient village” was built in Shymnagar for a coastal village wiped out after Cyclone Aila.
4 March 2015

Delivering remarks at the launch of the 2015 Global Assessment Report on Disaster Risk Reduction, the Secretary-General told those gathered that as the world was experiencing “more frequent and more intense natural disasters,” overall momentum was growing for a sustainable and disaster-resilient future.

“The report shows how investing in risk prevention pays high dividends while saving lives. It charts a path toward a more disaster-resilient future,” explained Mr. Ban at a headquarters press briefing. “We have to act. Disaster risk reduction saves lives and cuts losses.”

The report’s release comes just two weeks ahead of the Third World Conference on Disaster Risk Reduction, scheduled to take place from 14-18 March in Sendai, Japan when Member States and UN officials will meet to broker the follow-up to the Hyogo Framework for Action (HFA) and chart a global course on disaster risk reduction for the coming decade.

The Sendai conference is also the first landmark meeting of a particularly crucial UN year as the Organization is set to lead the global development and climate agenda at a number of major international events: an international meeting in Paris in December on the adoption of a universal text on climate change; the UN special summit in September for the adoption of a global sustainability agenda; and the financing for development conference in July in Addis Ababa, to renew commitment to global development financing.

“We are working for a life of dignity for all,” he continued. “That means helping the poorest and most vulnerable people and countries to manage disaster risk. When we do that, we honour our pledge to leave no one behind.”

Along with the devastating loss of life, disasters also rake up extraordinarily high costs for affected nations, reaching up to a global total of $300 billion in annual losses, further burdening local economies.

In the Caribbean, for instance, the average annual losses associated with tropical hurricane winds alone are projected to increase by as much as $1.4 billion by 2050. For small island developing States, expected future disaster losses are not just disproportionately high but also represent an existential threat amid rising sea waters and eroding coastlines.

According to UN estimates, these countries are expected to lose 20 times more of their capital stock each year compared to their European and Central Asian counterparts. Meanwhile, droughts caused by climate change are affecting maize production in countries such as Kenya, Malawi and Niger and negatively impacting the countries’ gross domestic product which largely depends on agriculture.

Mr. Ban observed that low-income countries were almost always hit the hardest by disasters and risked losing five times as much of their building stock as richer countries. In addition, he said, the “staggering price tag” affected the ability of governments to provide basic services to their already vulnerable citizens.

“It diverts funds from critical infrastructure,” he observed. “Businesses suffer. There are fewer jobs and less income.”

“If we do not address risk reduction, future losses from disaster will increase and this will impact countries’ capacity to invest money in other areas such as health and education,” the UN Secretary-General’s Special Representative on Disaster Risk Reduction, Margareta Wahlström, added in a press release. “If we do not take the necessary measures now, it will be difficult to achieve development, let alone sustainable development.” Ms. Wahlström, who’s office (UNISDR) will lead the Sendai Conference, is briefing the press in New York later today.

According to the report, an annual global investment of $6 billion in disaster risk management strategies would generate total benefits in terms of risk reduction of $360 billion, equivalent to a 20 per cent reduction of new and additional annual economic losses.

“The report is a wake-up call for countries to increase their commitment to invest in smart solutions to strengthen resilience to disasters,” said Ms. Wahlström, adding that Member States would have the opportunity to take action in Sendai.

In his remarks at the report’s launch, Mr. Ban agreed.

“Sustainability starts in Sendai,” he said. “And it continues in Addis, New York and Paris. This is our journey to reach a life of dignity for all.” 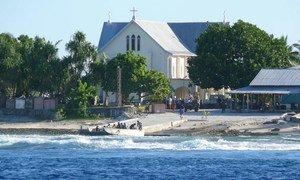