In her remarks to open the Middle East and North Africa regional consultation session in preparation for the May 2016 World Humanitarian Summit, the United Nations Under-Secretary-General for Humanitarian Affairs today underlined the importance of grassroots involvement in humanitarian affairs and of putting people “front and centre” in response of efforts.

“We need new to come up with new ideas on how best to protect civilians, safeguard access, and reinforce international humanitarian and human rights law,” said Valerie Amos, who also serves as UN Emergency Relief Coordinator, as she called for increased efforts to end a climate of impunity. “We also need to address the growing gap between humanitarian needs and the funds available to meet them.”

The global humanitarian system had found itself under considerable strain in the previous decade, and humanitarian needs were rising beyond the capacity to cope, as urbanization, population growth, conflict and climate change added to the consequences of underdevelopment, rising poverty levels and increasing inequality.

“Natural disasters do more damage, last longer, and in many places recur before people have even had a chance to recover,” said Ms. Amos, adding: “More people are displaced by conflict than at any time since 1945.”

The Middle East and North Africa was an area particularly affected by the latter challenge and the past four and a half years had witnessed significant and tumultuous changes that had impacted everyone.

“Millions of people, from Libya to Palestine, from Yemen to Syria and Iraq, have had their lives completely overturned by violence,” she said, adding that the huge numbers of people affected by conflict, violence and displacement did little “to convey the trauma” experienced. “These are conflicts which have an impact far beyond the individual country – they are regional.”

She described the incredible hospitality and generosity shown by Syria’s neighbours as refugees fled across the border and noted the strain that took on public services, infrastructure and the economies of host countries.

Alongside the burden taken by Syria’s immediate neighbours, she pointed to the contributions of the entire region’s people and Governments, as well as regional organizations, non-governmental organizations and others to the humanitarian response.

The Consultations, which are being held in Amman, Jordan, aim to generate recommendations from the Middle East and North Africa (MENA) for the UN-organized World Humanitarian Summit that will take place in Istanbul in May 2016 aimed at improving further the humanitarian responses to crises and tackling the challenges facing civilians and humanitarian actors in the region.

Ms. Amos said the world was highly complex and filled with challenges but added that there were opportunities to promote and deliver a more peaceful, prosperous, stable and sustainable future for all, with the Summit one such opportunity.

“We must make the most of it,” she said. “We must speak openly about the challenges, but we must think about solutions. We have a chance to transform the way we work and create a diverse and truly inclusive global humanitarian system.” 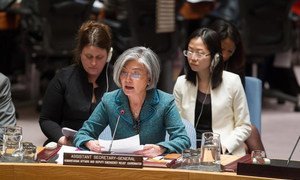 In a briefing to the Security Council on the humanitarian situation in Syria, two senior United Nations relief officials warned today that as the conflict enters its fifth year, the violence and brutality continue unabated and with total impunity.