Ebola: UN tells Brussels meeting world must ‘stay on course’ to get to, remain at zero cases

UNMEER
UN and EU meet in Brussels, Belgium, to take stock of the Ebola situation and identify ways forward.
3 March 2015

Representatives of United Nations organizations engaged in the response against Ebola today pledged their support to the worst-affected West African countries in “each stage of this journey; the drive to zero, the early recovery, the medium and longer term development.”

The pledge was made at a high-level international conference on Ebola sponsored by the European Union in Brussels, Belgium, aimed at maintaining global attention on the crisis, taking stock of the fight against the epidemic and on coordinating next steps and discussing the recovery process.

The UN Secretary-General’s Special Envoy on Ebola, Dr. David Nabarro, said that current phase of the response “is the hardest part and a bumpy road” and urged the international community to remain fully engaged until the task is completed, especially as the virus is moving and as some communities are reticent about being engaged in the response.

Dr. Nabarro, as well as World Health Organization Director-General Dr. Margaret Chan, both emphasized the need to build trust with communities to eradicate the disease, which has affected nearly 24,000 people with more than 9,714 deaths.

“We need to build trust with the communities,” Dr. Chan said, and added: “Without meaningful community engagement, we will not get to zero cases.”

Dr. Nabarro also noted that the 22 million people living in the affected countries need to be able to access the employment, markets and services that enable them to stay healthy.

He said that a gap of around $900 million remained to fund the response in the next six months, with $400 million urgently needed for critically important activities to get to zero cases.

The head of the UN Development Programme (UNDP), Helen Clark, called for international support to the three most affected countries – Sierra Leone, Liberia and Guinea – so that serious development setbacks are as short-lived as possible.

Miss Clark said that representatives from those countries “have come today to tell us of their determination to coordinate their recovery, and to work with regional and global partners.”

“The UN will continue to support each stage of this journey; the drive to zero, the early recovery, the medium and longer term development,” she said.

Ms. Clark also stressed that the international community must “stay the course” on getting to and staying at zero, as well as on supporting those affected by the disease.

UNDP said it was speaking on behalf of UN system partners including the World Bank, World Food Programme (WFP), the UN Children’s Fund (UNICEF), WHO, UN Population Fund (UNFPA), the UN Office for the Coordination of Humanitarian Affairs (OCHA), the UN Emergency Mission for Ebola Emergency Response (UNMEER) and the Food and Agriculture Organization (FAO) present at the conference today. 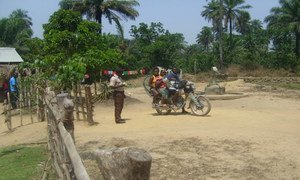