The United Nations Mission in Mali (MINUSMA) congratulated the parties involved in reaching a draft agreement on peace and reconciliation, which was initialled in Algiers on Sunday, according to the UN Secretary-General’s spokesperson today in New York.

The mission says the draft peace accord is “the most viable compromise to meet the multiple challenges facing Mali”. It also notes that sustained and united international support is required to assist the parties in finalising and then implementing an inclusive and sustainable peace agreement.

“The ownership and commitment of the Malian parties is crucial for success. And the mission calls on all Malian parties to continue to engage constructively and in good faith towards a final settlement” Mr. Dujarric added.

The Government in Mali has been seeking to restore stability and rebuild following a series of setbacks since early 2012, including a military coup d'état, renewed fighting between Government forces and Tuareg rebels, and the seizure of its northern territory by radical Islamists.

Throughout much of this time, Mali’s north has remained restive and, in recent months, MINUSMA and its “blue helmets” have come under repeated violent attack. 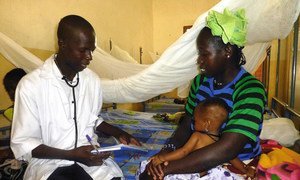 The United Nations Office for the Coordination of Humanitarian Affairs (OCHA) has joined with partner agencies to launch a multy0million dollar appeal for urgent funding for aid operations in Mali amid the country’s ongoing crisis, a spokesperson said today.