In his introductory statement to the Agency’s Board of Governors, the head of the United Nations atomic energy watchdog said he remains “seriously concerned” about nuclear programme of the Democratic People’s Republic of Korea (DPRK), and that he is not yet in a position to conclude that all nuclear material in Iran is used for peaceful purposes.

In his introductory statement to the Agency’s Board of Governors, the head of the United Nations atomic energy watchdog said he remains “seriously concerned” about nuclear programme of the Democratic People’s Republic of Korea (DPRK), and that he is not yet in a position to conclude that all nuclear material in Iran is used for peaceful purposes.

“It is nearly six years since Agency inspectors were asked to leave the DPRK,” he said. “I call upon the DPRK to comply fully with its obligations under relevant Security Council resolutions, to cooperate promptly with the Agency in implementing its NPT (Treaty on the Non-Proliferation of Nuclear Weapons) Safeguards Agreement, and to resolve all outstanding issues.”

Verification of the non-diversion of nuclear material by Iran continued under the Safeguards Agreement was continuing, Mr. Amano said, monitoring and verification in relation to the nuclear-related measures set out in the Joint Plan of Action agreed between Iran and the so called “E3+3” countries (China, France, Germany, Russia, United Kingdom and United States).

“The Agency is not in a position to provide credible assurance about the absence of undeclared nuclear material and activities in Iran,” he said adding that that meant it was therefore impossible to conclude that all nuclear material was being used peacefully.

The Agency was unable to clarify two outstanding practical measures that were agreed last year under the Framework for Cooperation, while Iran was still to propose new practical measures. With increased cooperation by Iran, the Agency could help to accelerate resolution of all outstanding issues under the Framework, and he called for timely provision of access to all information, documentation, sites, material and personnel requested by the Agency.

“This process cannot continue indefinitely,” he said. “Once the agency has established an understanding of the whole picture concerning issues with possible military dimensions, I will provide a report with our assessment to the Board.”

Pointing to positive recent meetings with Iran’s Foreign Minister, Mohammad Javad Zarif, and his Deputy Araghchi, Mr. Amano reported that he had no new developments to report on implementation of safeguards in Syria and he renewed his call on Syria to cooperate fully in connection with unresolved issues related to the Dair Alzour site and other locations.

“I feel that our mandate could be understood today not just as ‘Atoms for Peace,’ but as Atoms for Peace and Development,” he said, emphasising the importance of modern science and technology, including nuclear technology, for development, and calling for its appropriate recognition in the post-2015 development agenda.

Noting that the Agency was moving into a “critical period” as far as extra-budgetary contributions for the ReNuAL project to modernise the nuclear applications laboratories at Seibersdorf are concerned, he said it was “worrying” that no concrete commitments of contributions towards the cost of construction of the buildings have been received so far, although some Member States have indicated strong interest. 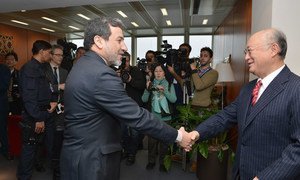 The head of the UN atomic watchdog held a meeting in Vienna this morning with the Iranian Deputy Foreign Minister to follow-up on talks held earlier this month.