UNDP/George Ntonya
These houses may collapse any moment because of flood water in Lower Shire, southern Malawi.
27 February 2015

With 39 cases of cholera in the last two weeks, including two deaths, the United Nations children’s agency in Malawi is on high alert for spread in southern border areas where highly-populated camps for people displaced by the floods are located, according to a press statement released today.

With Malawi’s Ministry of Health having confirmed the cases – the first in the last three years – there are serious concerns that a rapid spread of infection could lead to a larger outbreak that already over-burdened health services may not be able to contain.

“As humanitarian actors in Malawi, we need to move quickly to stop any further spread of this disease,” said UN Children’s Fund (UNICEF) Representative in Malawi, Mahimbo Mdoe. “These displaced populations are extremely vulnerable, particularly those with low-immunity, such as malnourished children.

UNICEF is working to support the Government with mobile health services, as well as safe water, sanitation and hygiene services, which are critical factors in preventing the spread of cholera.”

Cholera poses a serious public health problem to populations in crowded environments, especially those with inadequate water and sanitation resources. The disease is endemic in Malawi, though the country’s last major outbreak was in 2009, when well over 1,000 people were infected, but concerns have been raised by reports of more than 3,400 cholera deaths, and 37 deaths, in Mozambique – which borders Malawi – in the past two months.

Those infected with cholera can initially show minimal or no symptoms, but can still be contagious. Patients experience diarrhoea, vomiting and, in the advanced stages of the disease, severe dehydration. The disease can kill within hours if not properly treated and is especially dangerous for young children.

UNICEF is working with partners, including Malawi’s Government and the World Health Organization (WHO) to monitor the situation daily and the agency’s Chief of Health in Malawi, Kyaw Aung, says every effort has been made to prepare for a major outbreak. 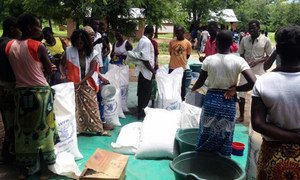 The United Nations World Food Programme (WFP) has announced the delivery of a first round of emergency supplies to more than 288,000 people in flood-affected Malawi, providing much needed relief amid continuing rains.