OCHA/Caroline Birch
Hadjara, 8, fled a Boko Haram attack against Baga in Nigeria with her family. She was shot during the attack and her arm had to be amputated at Baga-Sola hospital in Chad.
27 February 2015

“The abduction and use of children, including as ‘suicide bombers,’ is particularly abhorrent,” the Secretary-General stated today in a statement issued by his spokesperson, saying that he is encouraged by the positive steps taken by the countries of the Lake Chad Basin Commission (LCBC) and Benin, with the support of the African Union, towards operationalizing the Multinational Joint Task Force (MNJTF) to counter the threat.

In the statement, Mr. Ban also called on international partners to provide support to regional efforts and urged the states involved to ensure that all measures taken to combat the terrorist threat of Boko Haram are conducted in line with international human rights, humanitarian and refugee law.

The Secretary-General said he is concerned by the impact of combat operations on local populations in Cameroon, Chad, Niger and Nigeria and called on countries of the region to give the highest priority to the protection of refugees, returnees and internally displaced persons, including by providing them with life-saving support.

“The United Nations is scaling up its humanitarian operations and increasing its human rights monitoring in the affected countries,” today’s statement said, adding that the Secretary-General is convinced that a military approach alone “will not suffice” to counter the Boko Haram insurgency.

Only through a multi-dimensional approach that addresses legitimate grievances, past and current human rights violations, and root causes of the conflict, will the international community be able to effectively respond to the barbaric threat posed by Boko Haram to regional peace and security and to local populations.

According to news reports, explosions in Nigeria's north central city of Jos and the northeastern town of Biu over the past two days have killed at least 34 people. On Wednesday, a suicide bombing in the northeast Nigerian town of Biu reportedly killed about 19 people and injured 17. 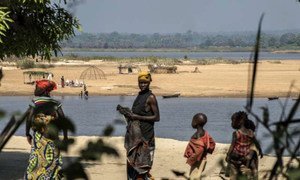 An upsurge in violence in the Central African Republic (CAR) has triggered fresh displacement inside the country and across the border into the Democratic Republic of the Congo (DRC), the United Nations refugee agency said today.