The head of the United Nations agriculture agency underlined yesterday the huge importance of agriculture and farming to countries of the Caribbean during an address to Heads of Government at the Caribbean Community (CARICOM) summit in the Bahamas.

Mr. Graziano da Silva described agriculture and family farming as “drivers of inclusive economic growth and sustainable development,” and noted how they can create new employment opportunities and be linked to the tourism industry, an important source of revenue for many Caribbean countries.

He stressed also the substantial progress made through efforts made in the past two decades by CARICOM members to combat hunger and malnutrition, with Barbados, Guyana, Saint Vincent and the Grenadines, and Suriname among the 70 developing countries to have already met the Millennium Development Goals hunger target of halving the proportion of hungry people by 2015.

“Let´s be inspired by these success stories, because a lot remains to be done,” he told the assembled leaders, continuing to note that hunger is only one of the faces of malnutrition, with obesity, which affects over 500 million adults, the other extreme of poor nutrition.

“This is an issue of concern in the Caribbean and FAO is assisting CARICOM countries design and implement strategies, policies and plans of action that tackle the multiple dimensions of malnutrition,” he said, pointing to Action Plans already approved in Belize, Jamaica, St Kitts and Nevis, and St Lucia, and awaiting approval in most remaining countries of the region.

On several efforts to boost security, South-South cooperation was prominent, with Brazil having developed a strong cooperation programme focusing on food security and nutrition, supporting and linking family farming to the provision of school meals, and several other cooperative initiatives in place to protect food production, such as Cuba's assistance in the fight against the Black Sigatoka banana plague.

Pointing to food price increases that were impacting food import bills for CARICOM countries, he noted also the particular vulnerability of countries in the region to extreme events like hurricanes, and the impact of climate change, which increased the frequency, violence and unpredictability of such events and heightened the threat posed to the region's agriculture, food security and sustainable development.

Mr. Graziano da Silva said the FAO was working with governments and the Caribbean Disaster Emergency Management Agency (CDEMA) to build resilience, strengthen capacities and mobilize resources to deal with the impact of natural disasters.

“In few places is the impact of climate change so evident as in Small Island Developing States. For SIDS, climate change is not just an urgent issue. It is a question of survival,” he said. “FAO is here to work with you to be a partner in the road to achieving sustainable development.” 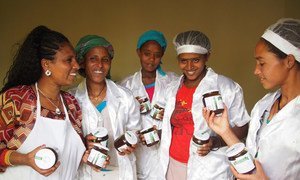 Next time you feel like some cactus pear marmalade from Ethiopia but can’t make it to the town of Mekelle, check out the shelves of Italian gourmet food store Eataly.