UN Photo/Evan Schneider
Secretary-General Ban Ki-moon at the Itaipu Hydroelectric Dam, the largest operational hydroelectric energy producer in the world, located on the border of Brazil and Paraguay.
26 February 2015

In an intensive year of landmark events – from establishing a post-2015 agenda to tackling climate change – Paraguay has yet another opportunity to demonstrate its “exceptional global leadership” in the international arena, United Nations Secretary-General Ban Ki-moon has affirmed.

Delivering remarks to the National Congress of Paraguay earlier today, the Secretary-General reminded those gathered that the international community continues to face “big global challenges” in addressing inequality and insecurity, deepening democracy, enhancing the quality of education, and respecting and protecting the rights of all regardless of gender, ethnicity, culture, religion or sexual orientation.

Mr. Ban’s remarks come as he continues his week-long trip to the South American country, including official visits in the capital of Asunción and to the critical Itaipu Hydroelectric dam which supplies up to three-quarters of Paraguay’s energy needs.

This year marks the end of implementation of the landmark UN Millennium Development Goals (MDGs), which world leaders agreed on 15 years ago in an effort to tackle poverty and climate change and to pave the way towards a more gender equal global society. The new targets, to be known as the sustainable development goals (SDGs), are defining the way forward on the world’s most pressing issues until the next critical deadline in 2030.

In addition, Mr. Ban noted that despite efforts to reduce gender inequality, “gaps between law and practice” remained.

The scheduled meeting on the SDGs coupled with the major climate conference to be held in Paris in December has made 2015 a “pivotal year” for the international community, the Secretary-General continued, particularly as Member States face down an ever-growing list of threats and crises, from the “continuing bloodshed in Syria, tumult in Ukraine, Ebola disease in Africa.”

“Intolerance is growing. And violent extremism is rising. No country or organization can defeat terrorism and extremism on its own,” he added. “All countries – along with regional and international organizations as well as political, religious, academic and civil society leaders – should join hands together to forge a multi-faceted response that respects international human rights and humanitarian law.” 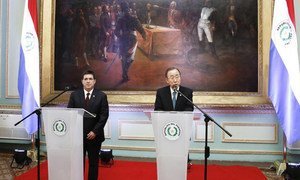 Secretary-General Ban Ki-moon has called on the Government of Paraguay to join forces with the United Nations and forge ahead in framing the post-2015 agenda for a new generation of sustainable development goals, noting that the country had “an important role to play across the board.”